Viewpoint: State of the Market, November 2022

As the headlines continue to focus on the likelihood of recession, with rising interest rates and the cost of living crisis impacting the economy, CrowdProperty reviews the outlook for the property sector.

This week’s announcement from the Office for National Statistics (ONS) that GDP shrank by 0.2% in the last quarter (July – September 2022) has given rise to further reports of the UK economy being on the brink of an anticipated recession. Whilst the fall is attributed in part to the State Funeral of Her Majesty Queen Elizabeth II, causing a 0.6% drop in September alone, the stalling of the manufacturing and services sectors have been identified as the main factors. However, it’s not all bad news – the figures are not as stark as predicted, with 10 of the 20 reported sub-sectors showing an increase in output. This includes the construction sector which reported a rise in output of 0.6%, driven by a rise in new orders in the quarter - although this is the weakest quarterly growth since Q3 2021.

The latest EY ITEM Club forecast states that the UK economy is expected to be in recession until summer 2023. Whilst the Autumn Forecast had predicted a 0.3% decline in GDP in Q3, rather than the actual 0.2% figure, the expectation is that the UK economy will contract around 0.2% each quarter from Q4 2022 through to Q2 2023. However, the Government’s intervention regarding household and business energy bills is set to limit the extent of the upcoming downturn, relative to previous recessions. Predictions over the next three years remain unchanged, with GDP forecast to return to growth in H2 2023 as inflation eases and the tightening cycle for interest rates ends – with the economy expected to expand 2.4% in 2024 and 2.3% in 2025.

EY ITEM Club also stated that average annual inflation is still expected to outpace annual average wage increases until 2024 – with inflation predicted to average 8.9% in 2022, 5.5% in 2023 and fall to 1.8% in 2024 (below the Bank of England’s 2% target). As high inflation increases the likelihood of increases in the BoE’s base rate, the EY ITEM Club forecasts a peak of 4% in Spring 2023 rather that the 5.5% currently predicted by the markets. With the unemployment rate (a key determinant of house price performance) forecast to peak at c. 5%, household real incomes are likely to decline over the next 12 months to the greatest extent since the 1970s - however consumer spending is forecast to rise 4.9% in 2022, followed by a 0.7% contraction in 2023. Similarly, house prices are expected to rise by an average of 9.1% this year before a 4% contraction in 2023. Martin Beck, the Chief Economic Advisor to the EY ITEM Club, noted: “Interest rates of over 4% would put pressure on the housing market, although affordability stress tests applied over the last five years mean that homeowners should be better able to deal with more expensive mortgages than would have been the case in earlier periods of relatively high interest rates. A 5-10% fall in house prices from their current highs is forecast, although house prices have risen 25% in the last two and a half years alone.”

According to the Halifax House Price Index, house prices dropped by -0.4% in October (compared to -0.1% in September) with the annual rate of growth falling to +8.3% from +9.8%. This is the sharpest decrease in house prices since February 2021, meaning the average house price has fallen to a five-month low of £292,598. A post-pandemic slowdown was expected, but the impact has been accelerated by recent events such as the mortgage rate increases following the mini-budget, which have encouraged both those with existing mortgages and would-be homebuyers to take pause. Kim Kinnaird, Director at Halifax Mortgages, said: “The rising cost of living coupled with already stretched mortgage affordability is expected to continue to weigh on activity levels. With tax rises and spending cuts expected in the Autumn Statement, economic headwinds point to a much slower period for house prices… While certain longer-term, structural market factors which support higher house prices are likely to remain, how significantly prices might ultimately adjust will also be determined by the performance of the labour market.” 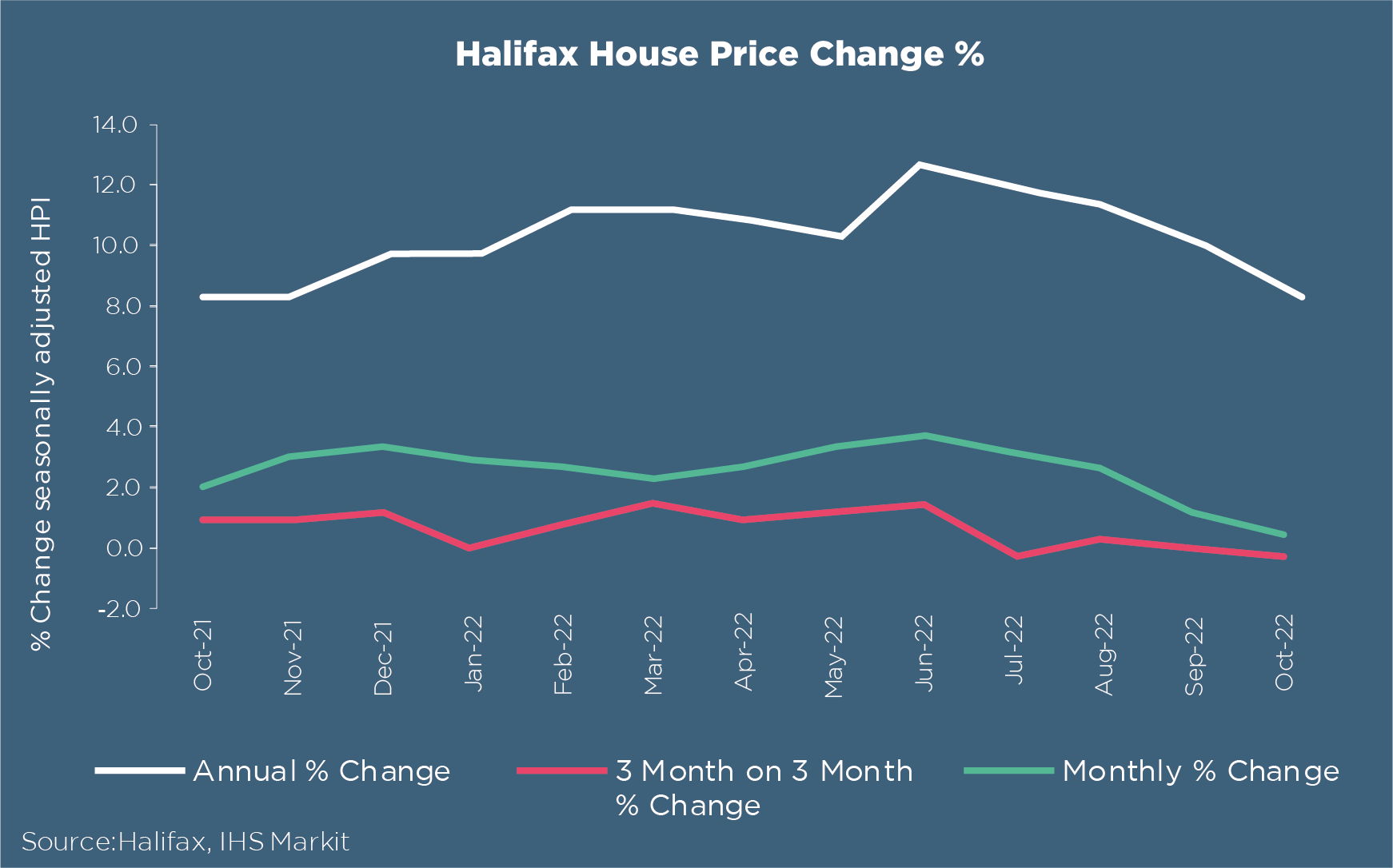 All regions in England with the exception of the North East saw weaker annual price inflation during October compared to September. However, the West Midlands now has the joint highest annual growth of any UK region at +11.7% down from +13.2% the previous month. Wales also saw an annual growth rate of +11.7% although this was down from +14.4% in September. Scotland’s annual house price inflation figure slowed to +7.5% (from +8.3%), with Northern Ireland’s house prices up +9.5% (down from 10.9%). London continued to lag behind other UK regions and nations with prices rising +6.8% over the last 12 months, however the region still recorded the biggest cash increase over the past year (+£34,900) – no surprise given the cost of the capital’s average property at £551,320.

HMRC’s monthly property transactions data shows UK home sales increased in September, with seasonally adjusted residential transactions up 0.2% from August but down 36.8% than September 2021. This is supported by data from the Bank of England which shows the number of mortgages approved to finance house purchases 7.3% below September 2021 figures. The RICS Residential Market Survey also continues to show a loss in momentum in the sales market: new buyer enquiries fell for a fifth consecutive month to a net balance of -36%, compared to -38% previously; agreed sales had a net balance of -27% (previously -22%) and new instructions returned to -13% (previously -15%). 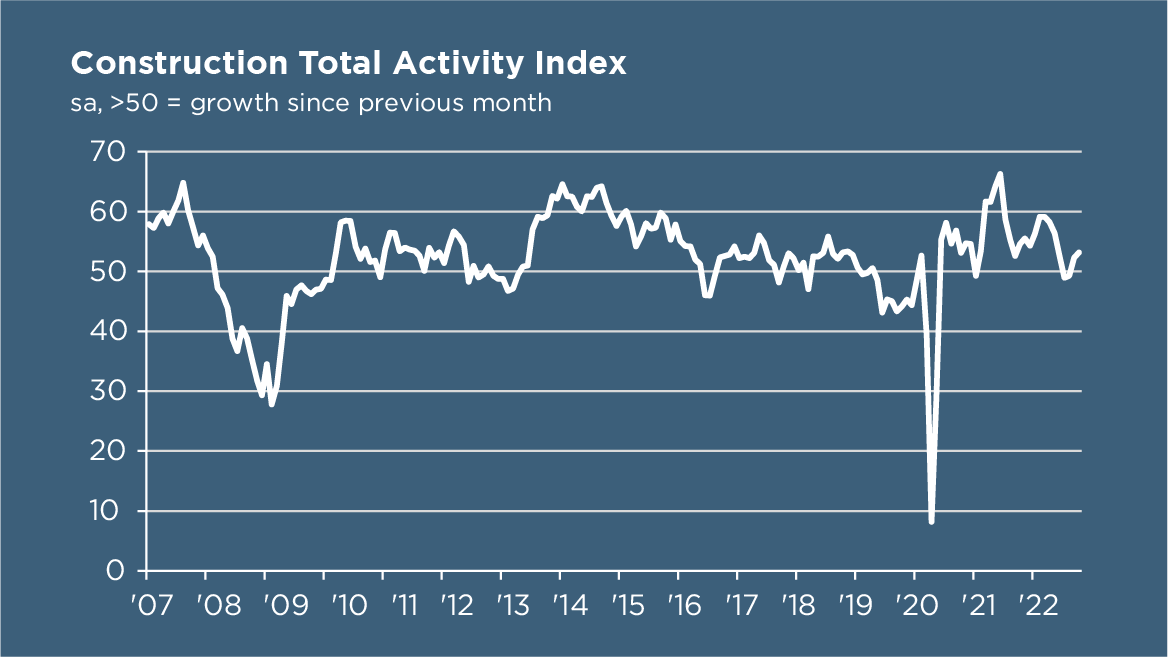 The headline S&P Global / CIPS UK Construction PMI registered at 53.2 in October, up from 52.3 in September and the highest reading since May. Commercial building was the best performing category (54.5); residential works expanded (51.2) but at a softer pace than in September. Higher levels of business activity were attributed to a combination of new projects starts and strong pipelines of unfinished work – however, construction companies indicated that growth expectations for the year ahead remained subdued with the degree of optimism falling sharply since September (the lowest for almost two and a half years). This reflects the falling volumes of new work and concerns about the longer-term UK economic outlook.

There were some positive signals for supply chain performance in October with supply shortages and transport delays easing considerably. Despite this turnaround, the latest data signalled another steep increase in average cost burdens across the construction sector as a result of higher energy costs, fuel bills and wages. Many companies commented on recession worries and a drop in UK economic prospects due to rising political uncertainty. Those reporting positive sentiment cited tender opportunities in niche markets or opportunities related to infrastructure spending – especially green energy projects. Dr John Glen, Chief Economist at the Chartered Institute of Procurement & Supply, summarised: “The construction sector offered a small improvement in output compared to September, maintaining its place in growth territory and rising at the fastest rate for almost six months… The housing sector lost some of its momentum […] sitting in a precarious position as the recent interest rate rise will impact on affordability rates for new homes in the months ahead. The UK is entering a recession and higher borrowing costs are intensifying these challenges.”

Despite recent economic uncertainty, CrowdProperty has not increased (and is not going to increase) prices. Our committed and diverse sources of institutional capital enable us to provide reliable project development finance - all loans are fixed rate, not linked to any other rate, giving certainty of no price increases now or during the loan term as part of our absolute focus on customer success. 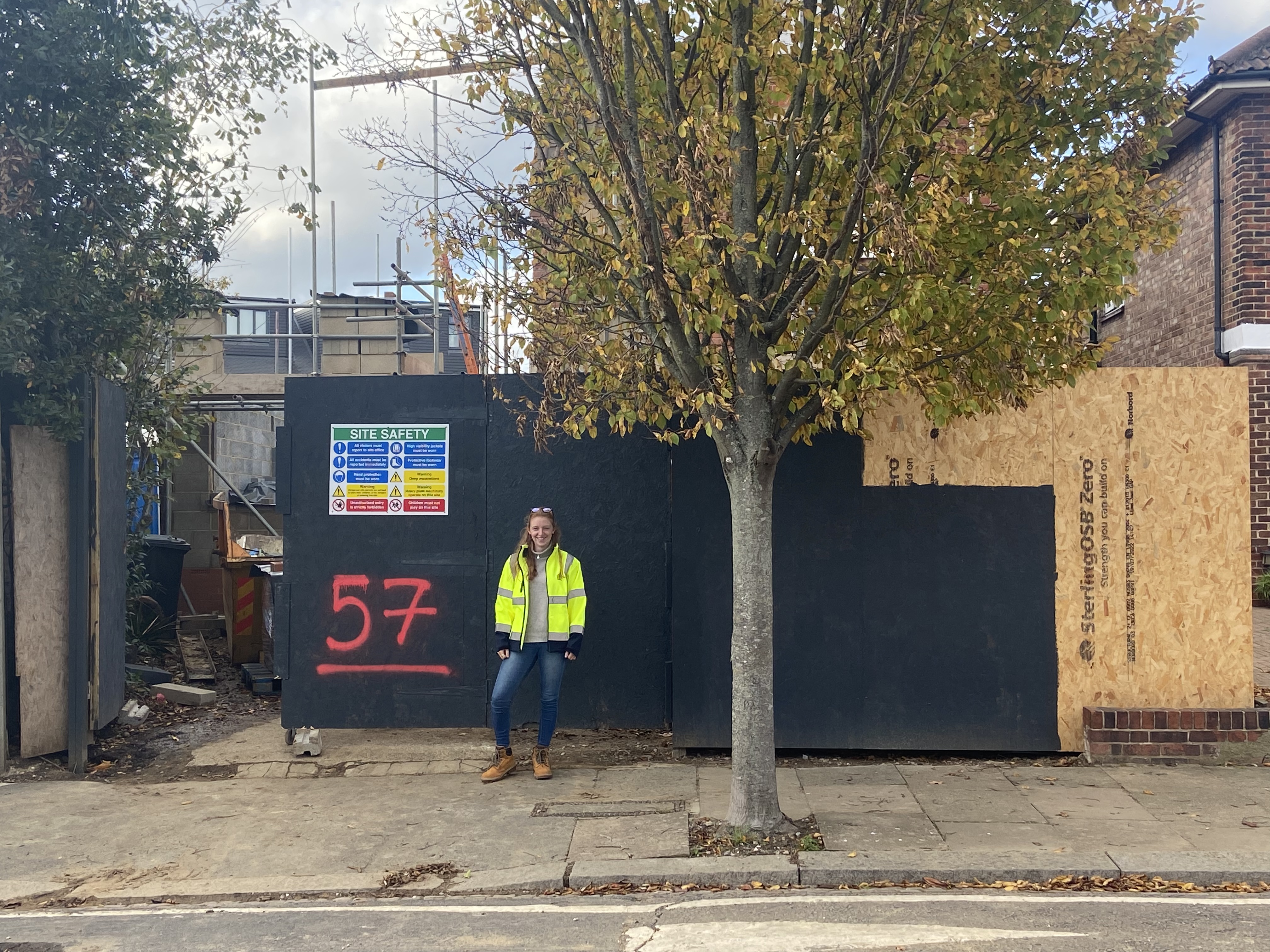 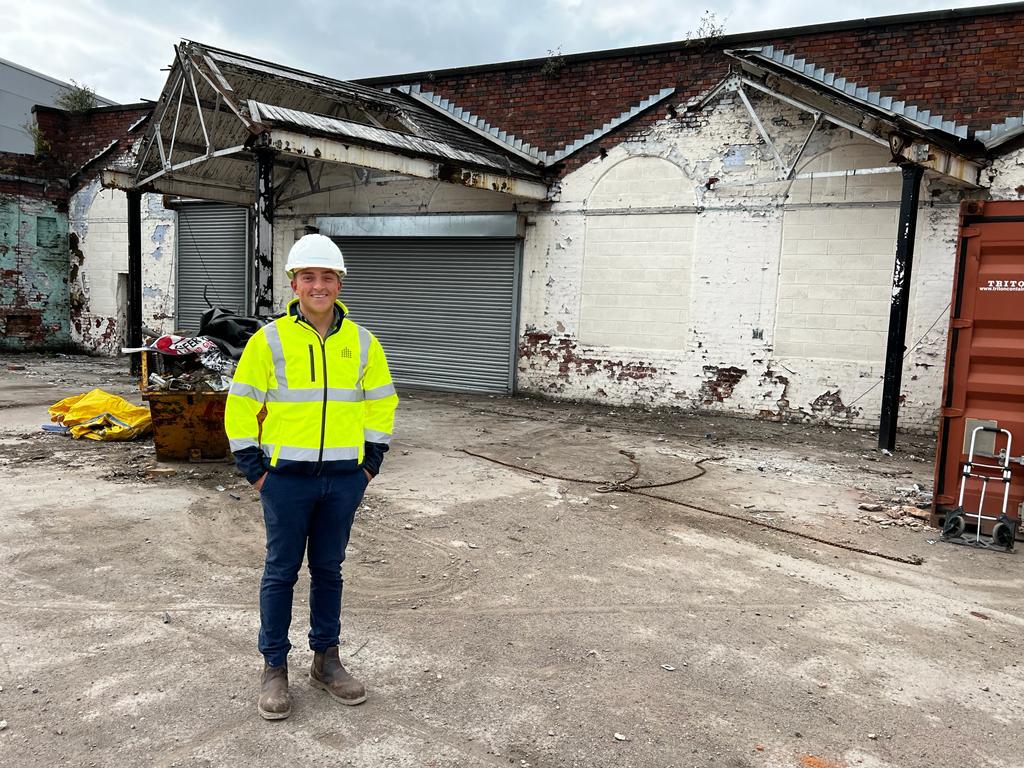 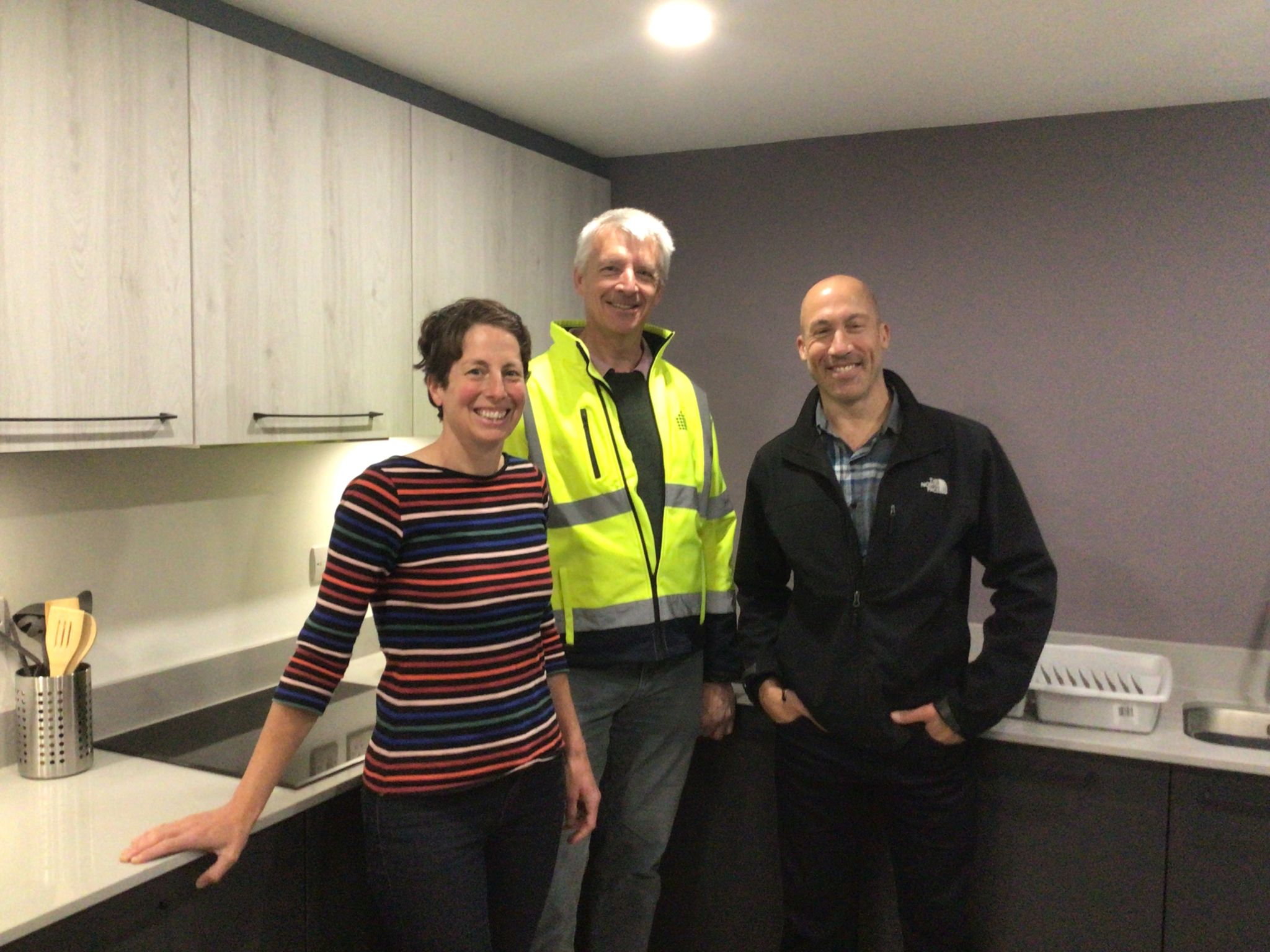 CrowdProperty is a leading specialist property development finance business having funded over £620m worth of property projects to date. With 250+ years of property expertise in the team, we provide property finance by property people and are here to help you succeed. Apply in just 5 minutes at www.crowdproperty.com/apply - our passionate team of property experts will share their insights and initial funding terms for your project within 24 hours, and go on to support the success of your project and help you grow your property business quicker.

CrowdPropertyUK
@CrowdPropertyUK
A reminder of some of the fantastic projects that our property experts have visited this year - North Walsham Road,… https://t.co/v69pFrgeLD