Viewpoint: State of the Market, December 2022

In light of the Autumn Statement and as we come to the end of the year, CrowdProperty reviews the latest market commentary and what this will mean for the sector going forward. 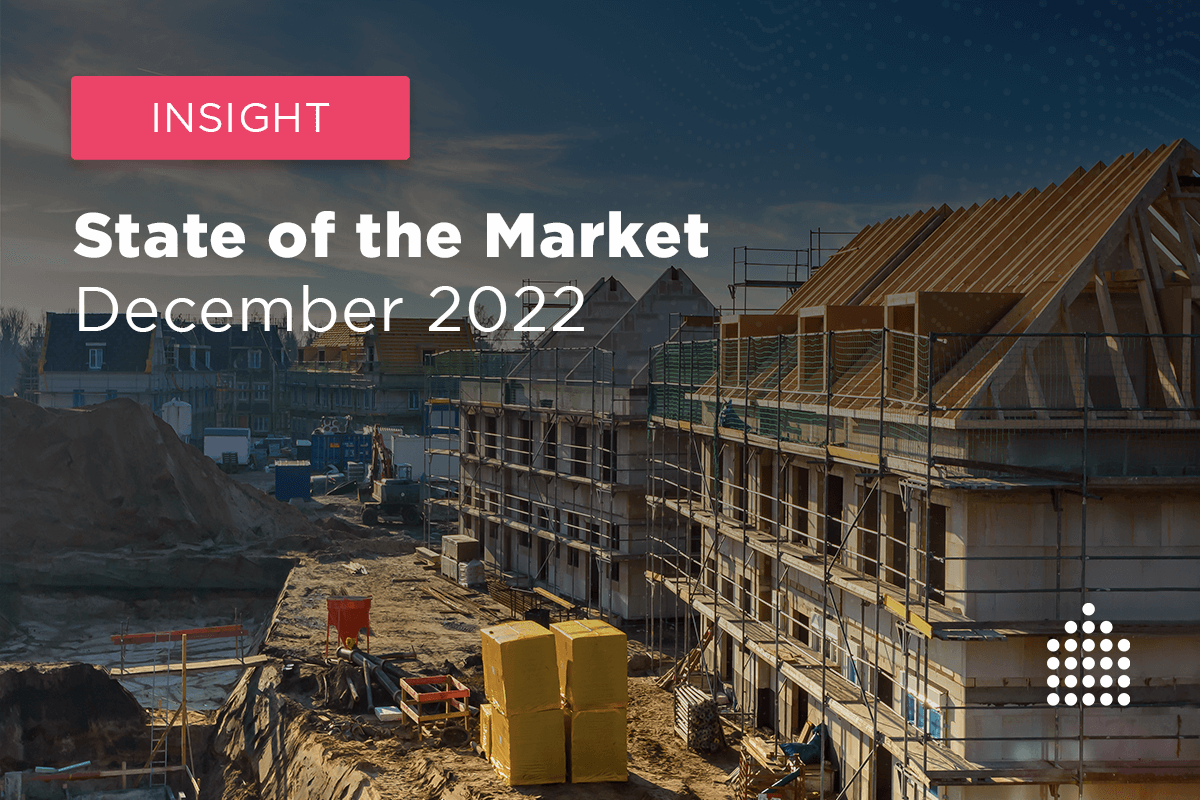 With the rate of annual house price inflation falling to +4.7% in November (from +8.2%), the latest Halifax House Price Index reports a further slowing of the housing market across the UK – with the exception of the North East region. November’s drop in average house prices of -2.3% (vs. -0.4% in October) is the largest seen since October 2008 and the third consecutive fall, with a typical UK property now costing £285,579. According to Nationwide’s House Price Index, in real terms (i.e. inflation adjusted) today’s levels are c.11% lower than the 2007 peak and the same as prices were in 2004.

The North East of England is the only area of the UK where the annual rate of growth is in double figures, nudging to +10.5% (from +10.4%). Wales and the South West have seen the sharpest slowdown (+7.9% from +11.5% and +8.4% from +10.7% respectively): given that both areas were key hotspots of house price inflation during the pandemic, there is a suggestion that previous market drivers – such as the ‘race for space’ and increased demand for rural living – are now receding.

Whilst HMRC’s monthly property transaction data shows an increase in UK home sales in October 2022, with seasonally adjusted residential transactions up by 2.3% from September (at 108,480 transactions), data from both the Bank of England and RICS Residential Market Survey points to a continued downward trend. Bank of England figures show the number of mortgages approved to finance house purchases decreased in October 2022, by 10.6% to 58,977; meanwhile, RICS reports that new buyer enquiries fell for a seventh month in a row to a net balance of -38% in November - not as downbeat as the -53% seen the previous month but a clear indicator of continued weak demand.

Kim Kinnaird, Director at Halifax Mortgages, commented: “The market may now be going through a process of normalisation. While some important factors like the limited supply of properties for sale will remain, the trajectory of mortgage rates, the robustness of household finances in the face of the rising cost of living, and how the economy – and more specifically the labour market – performs will be key in determining house prices changes in 2023.” 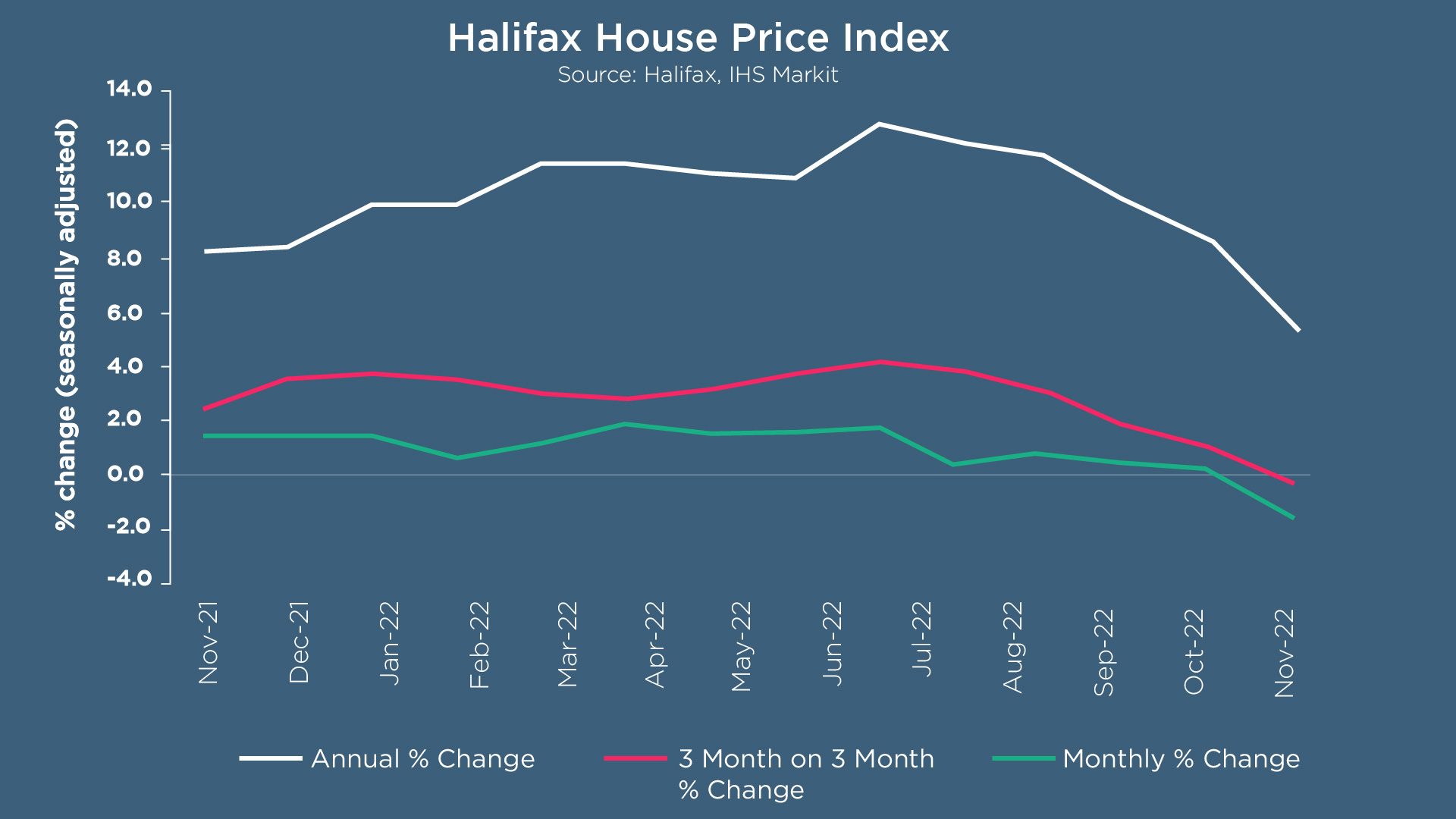 The Chancellor’s Autumn Statement tightened fiscal policy as expected following a gloomy forecast from the Office for Budgetary Responsibility (OBR) which confirmed that the UK is already in recession. The OBR forecasts that the economy will grow by 4.2% in 2022 before contracting by 1.4% in 2023, with growth recovering to 1.3% in 2024. Similarly, unemployment is expected to rise from the current rate of 3.6% to 4.9% in 2024, before dropping back to 4.1%. Inflation is expected to average 9.1% this year, before starting to fall steeply in mid-2023. The Chancellor suggested that the downturn is expected to be shallower as a result of the measures in the Autumn Statement, which included increases for income tax, capital gains tax and inheritance tax. With the majority of the fiscal squeeze delayed until the second half of the 2020s, EY ITEM Club has suggested that there is a considerable chance of some of the longer-term plans for tax rises and spending restraint being cancelled which would reduce the potential risks around weakening the economy and the structural fiscal position. Martin Beck, chief economic advisor to the EY ITEM Club, commented that “the OBR’s numbers are conditioned on interest rates rising to 5%... A lower rate assumption, and one consistent with the Bank of England’s 2% inflation target, would mean a better growth outlook. The OBR also forecasts the unemployment rate to rise to close to 5%, which seems high given continued evidence of an excess demand for workers.” As such, the EY ITEM Club does not think the economy will perform as poorly as the OBR predicts, also citing economic positives including the significant ‘excess’ savings held by households. 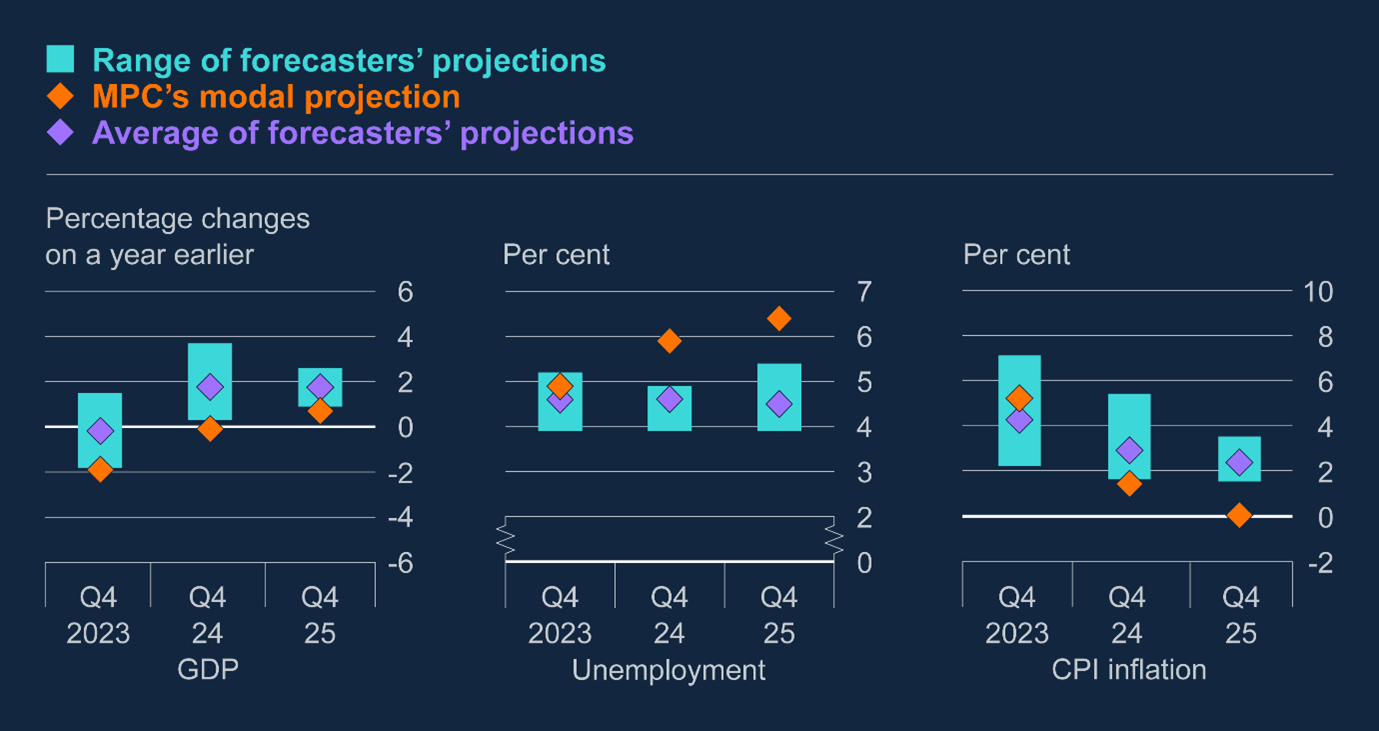 In terms of the impact on the property market, the announcements of a deadline on stamp duty cuts, changes to council tax, and an end to the current energy price cap will all play their part. The government’s decision to allow local authorities in England to raise council tax by 5% without the need for a referendum could mean those areas with the highest council tax rates paying close to £2,500 a year for a Band D property according to Rightmove. The Energy Price Guarantee that was introduced in October 2022 will continue until April 2023, at which point help for energy bills will remain but at a reduced level for 12 months. This could mean that typical household energy bills will rise to £3,000 from April next year. Similarly, the stamp duty cuts that were announced in September 2022 will remain in place to support the housing market over the next two years, with savings coming to an end on 31 March 2025. Rightmove’s property expert Tim Bannister noted: “As the stamp duty cuts will still be in place for a couple of years, I don’t foresee a significant number of people bringing their plans forward to 2023, especially due to current affordability challenges. But we may see a jump in new sellers towards the end of next year, and into 2024, to ensure they can move in time.”

However, Zoopla's Executive Director of research and insight, Richard Donnell, commented that “this reversal will make it increasingly difficult for prospective first-time buyers to get on the housing ladder in the coming years, particularly in London and the South East which accounts for the majority of stamp duty receipts." For those who are able to buy, the Statement was good news regarding the mortgage market: whilst interest rates on fixed-rate mortgages had already fallen, it is expected that the downward trend will continue following the Chancellor’s announcement that the rate at which fiscal consolidation would take place would increase once the economy returned to growth - meaning the Bank of England will be under less pressure to raise interest rates.

The EY ITEM Club states that the prognosis for house prices and housing activity remains weak, claiming interest rates on mortgages are well above levels of only a few months ago and are likely to remain so given the prospect of further rate rises by the Bank of England. Whilst c.90% of encumbered owner-properties are on fixed mortgage terms and the substantial savings built up by households over the last few years should provide a cushion against the impact of higher mortgage rates, EY ITEM Club also believes that the markets are over-estimating how far borrowing costs will rise. It is expected that average property prices will fall by around 10% over the next year to 18 months, as “cost of living pressures are cutting households’ spending power, which will be exacerbated by tax rises and a reduction in the generosity of the cap on energy bills next April”, according to EY ITEM Club’s Chief Economic Advisor Martin Beck.

In some good news for the housing market, Zoopla reports that the construction of nearly 45,000 homes is now underway – a 15-year high as a result of a 33% increase in the number of new homes being built in the three months to the end of September 2022. The figures from the National House Building Council (NHBC) state that c. three-quarters of the properties will be sold in the private sector, with the remainder ear-marked for affordable housing and build to rent. This boom in activity is thought to be a ‘bounce-back’ after the pandemic as well as a result of significant demand from buyers, particularly first-time buyers looking to take advantage of the Help-to-Buy equity loan scheme before it closed to new applications at the end of October 2022.

The number of new homes being built increased in 10 out of the 12 regions of the UK. London saw the biggest jump with new starts soaring by 277%, followed by Wales with a 65% rise and Scotland with a 64% increase. Activity was also strong in the West Midlands, growing by 48%. More than a third of the new homes started during the three months were detached houses, whilst 30% were semi-detached – a response to the demand for more space amongst buyers. The number of apartments built rose 114% year-on-year, largely due to a surge in activity in London, which accounted for 45% of the total. Homes constructed for social housing or build to rent increased by 55% - particularly good news for renters as build to rent offerings often come with a range of high-end facilities, such as gyms, cinemas, communal chill-out zones, gardens and concierge services, included. This level of housebuilding is however still insufficient vs Government targets and means ongoing supply-side constraints. 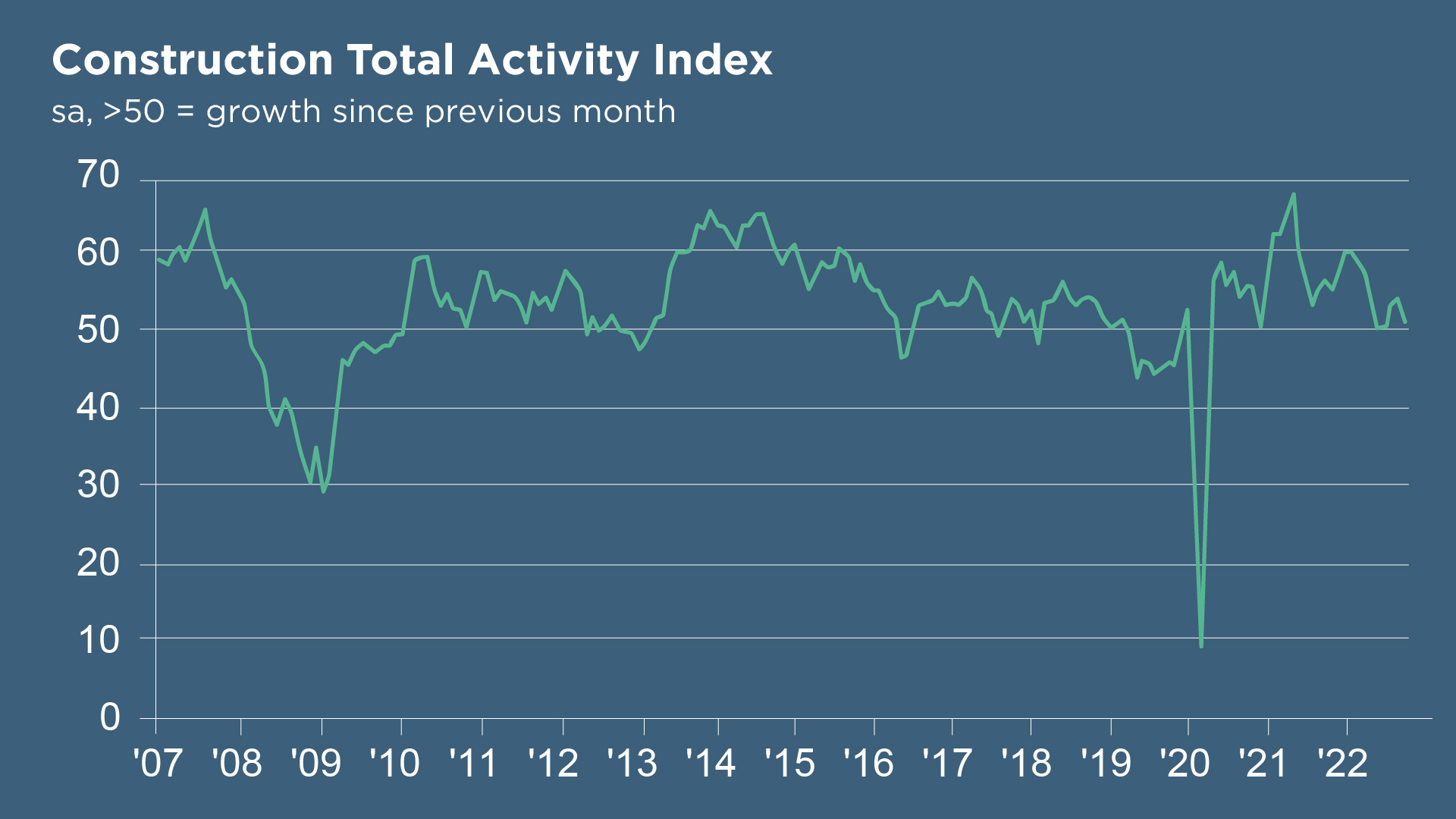 According to the S&P Global / CIPS UK Construction PMI, UK construction companies signalled a renewed slowdown in business activity growth during November with many survey respondents noting that higher borrowing costs and concerns about the economic outlook had curtailed construction activity.

The headline S&P Global / CIPS UK Construction PMI registered at 50.4 in November, down from 53.2 in October and the weakest performance since August. Commercial building was the only segment to register an overall rise in activity (51.1); residential works slowed (50.0), marking the end of a three-month period of marginal expansion. Higher mortgage rates and falling consumer confidence were identified as factors that had held back housebuilding activity.

Concerns about rising costs and delivery delays saw the fastest increase in input buying since July, as businesses looked to place orders ahead of supplier price hikes as well as responding to improved raw material availability and rising workloads. This improvement in business activity is reflected in employment numbers which continued to increase in November, despite the rate of job creation easing to its slowest since February 2021 – again, rising costs were cited as a driver of more cautious hiring policies.

Business optimism amongst the survey panel fell to its to lowest for two and a half years, with 29% of respondents anticipating a rise in business activity in 12 months’ time and 26% forecasting a decline. Anecdotal evidence suggested that recession worries, higher interest rates and a subdued housing market outlook had all weighed on levels of confidence. Dr John Glen, Chief Economist at the Chartered Institute of Procurement & Supply, said: "This gloomy view was fuelled in part by continuing shortages of key materials such as steel and timber along with skilled labour… Construction companies now have a tightrope to walk in terms of being ready for recovery and cautious around investment until the road is clear for sustainable building opportunities ahead."

Despite rising base rates, CrowdProperty has not increased interest rates - ensuring a market proposition that supports ever stronger projects and developers. Our committed and diverse sources of institutional capital enable us to provide reliable project development finance. All loans are fixed rate, not linked to base rates, giving certainty of no price increases now or during the loan term as part of our absolute focus on customer success. 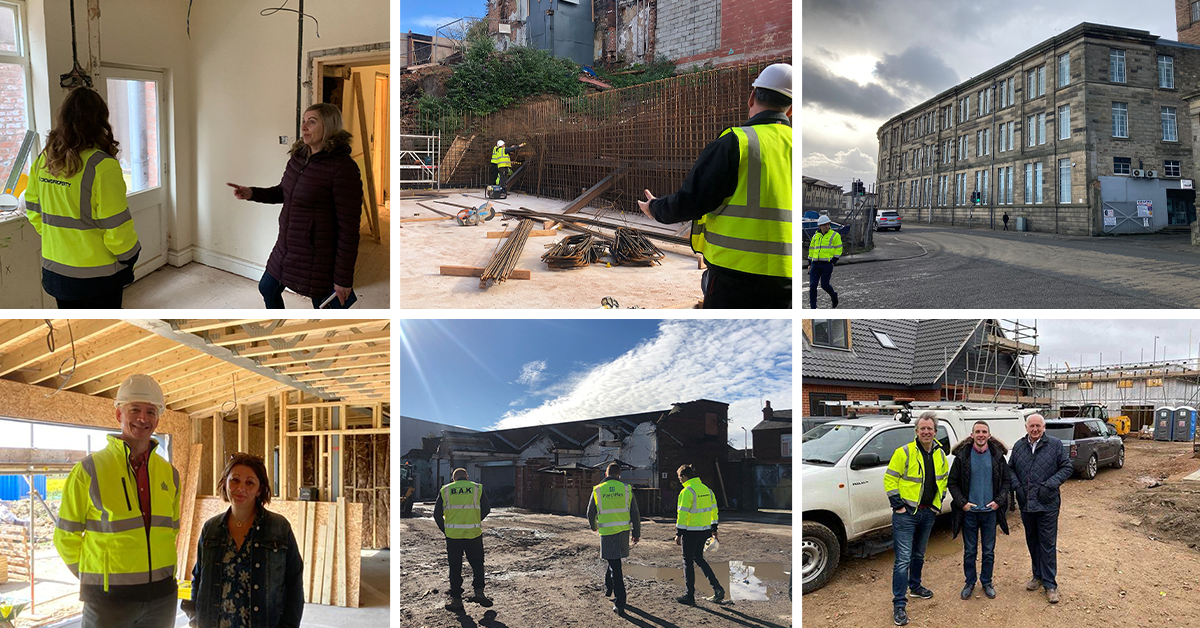 CrowdProperty is a leading specialist property development finance business having funded over £620m worth of property projects to date. With 250+ years of property expertise in the team, our distinct ‘property finance by property people’ proposition means that we understand what developers are looking to achieve and help those developers succeed. Apply in just 5 minutes at www.crowdproperty.com/apply - our passionate team of property experts will share their insights and initial funding terms for your project within 24 hours, and go on to support the success of your project and help you grow your property business quicker.