Viewpoint: State of the Market, October 2022

In the wake of the major political and economic activity which took place in September, CrowdProperty reviews how the market has responded as the dust begins to settle.

According to the Halifax House Price Index, house prices have decreased marginally by -0.1% in September compared to August (+0.3%). This is the second marginal decrease over the past three months. However, house prices in September were 9.9% higher than the same month a year earlier. The annual rate of growth fell further to +9.9% (from +11.4%) and a typical UK property now costs £293,835 from the previous month’s record high of £293,992. 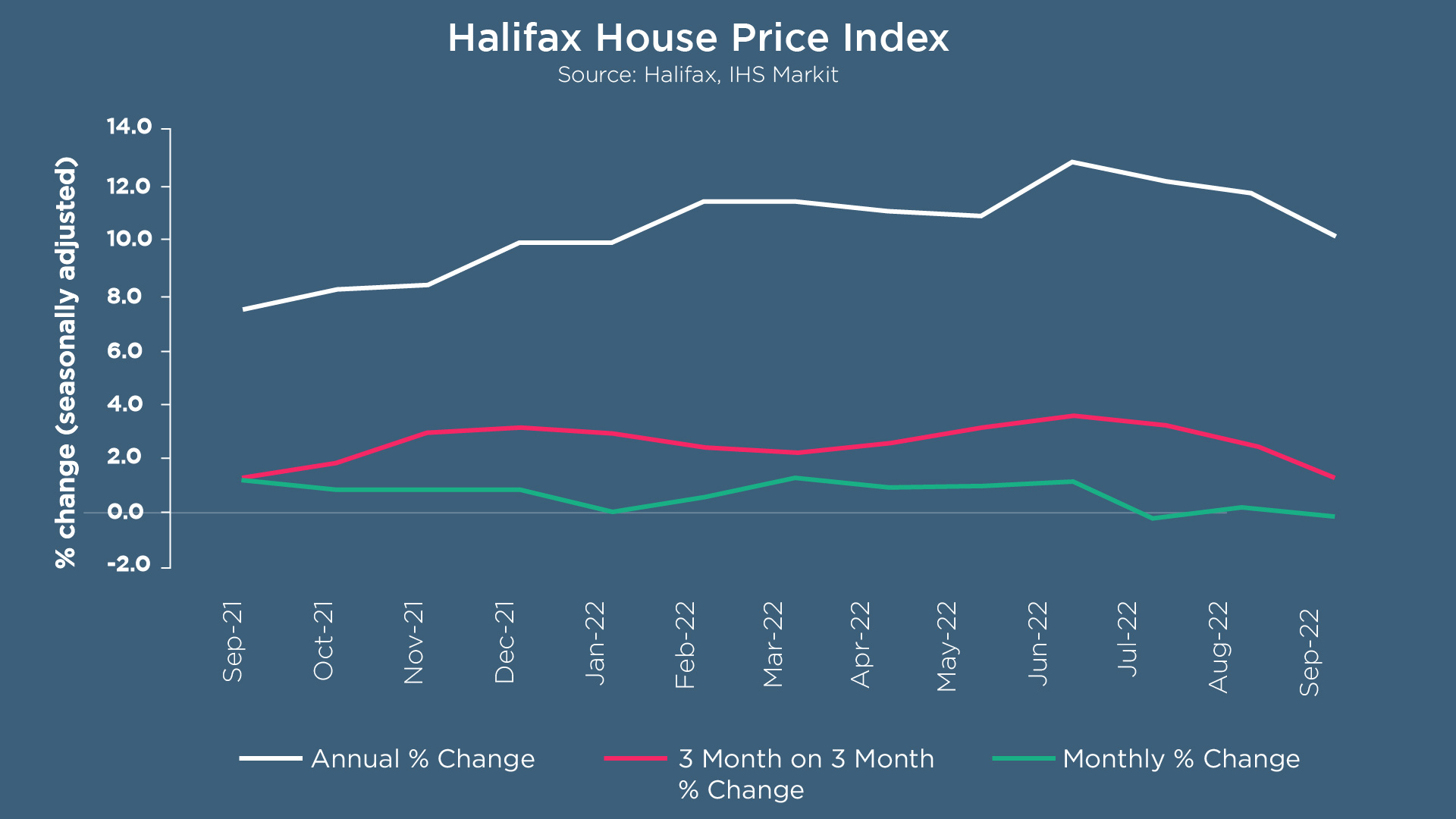 Despite the uncertainty of the economy, which has been led by events over the last few weeks, house prices have been largely flat since June, up by around £250. In comparison to the previous quarter, this is a rise of more than £10,000, suggesting the housing market may have already entered a more sustained period of slower growth, and with recent activity in the housing market now at play, the market defies expectations.

Recent cuts to stamp duty, the short supply of homes for sale and a strong labour market all support house prices, however with the prospect of interest rates continuing to rise sharply amid the cost of living squeeze, plus higher mortgage borrowing costs, it is likely that significant downward pressure will be exerted on house prices in the months ahead, according to Kim Kinnaird, Director of Halifax Mortgages. “This will undoubtedly be a cause of some concern for homeowners, but the unprecedented rate of property price inflation we’ve seen in recent years has been far above the historic average. It’s important to look at slower growth in this context – since the start of the pandemic average property values have risen by around +23% (almost £55,000) with detached house prices up by more than £100,000 over the same period.”

Eastern England, Greater London, the North East and Scotland have seen annual house price inflation fall to single digit levels and 11 out of 12 UK regions recorded slower growth than in August with the exception of the North East. Wales remains at the top of the table for annual house price inflation with a rate of +14.8%, down from +15.8% in the previous month, and an average property cost of £224,490. The West Midlands overtook the South West to record the strongest rate of annual growth in England, with house prices rising by +13.3% over the last year, down slightly from +13.5% in August with house prices rising by £30,000 over that period, with an average property now costing £255,822. Northern Ireland’s pace of annual house price growth eased back further to +10.9% from +12.5%, with a typical home now costing £184,570. Scotland also saw a further slowdown in the rate of annual house price inflation, to +8.5% from +9.3% with a typical Scottish home now costing an average of £204,305, which was largely unchanged from the previous month. London continued with the slowest rate of annual growth, with house prices rising by +8.1% over the last year. Despite London’s slow growth rate, a typical house costs £553,849 which remains the most expensive in the country.

Whilst house prices have decreased slightly, HMRC monthly property transactions data showed UK home sales increased in August 2022. UK seasonally adjusted (SA) residential transactions in August 2022 were 104,980 – up by 1.1% from July’s figure of 103,880 (up 4.4% on a non-SA basis). Quarterly SA transactions (June-August 2022) were approximately 4.2% lower than the preceding three months (March 2022 - May 2022) and year-on-year SA transactions were 7.6% higher than August 2021 (9.7% higher on a non-SA basis). This increase of home sales corresponds with the latest Bank of England figures showing the number of mortgages approved to finance house purchases had increased in August 2022, by 16.6% to 74,340 where the August year-on-year figure was 1.7% above August 2021.

However, the Rightmove House Price Index reported the average price of property coming to market has risen by 0.7% (+£2,587) in September to £367,760, in line with the average September rise of 0.6% over the last ten years. This increase is predominantly driven by the middle- and high-end market sectors, with the “second stepper” category (three bedrooms and non-detached with four bedrooms) reaching a new record average asking price of £340,513. Demand from buyers was up by 2% compared to the market of last year, which Rightmove believes is down to more choice being available compared to 2021, suggesting for those who can afford to buy, the priority remains to be to move up the property ladder to a home offering more space, even when personal finances may be stretched. Tim Bannister, Rightmove’s Director of Property Science, advised: “It is as important as ever to price competitively, especially in the sectors where there is now more choice, as there is a fine line between a realistically priced home and a home that feels overpriced when many buyers are making every pound count.”

Rightmove also reported that although stamp duty cuts may provide some support for first-time buyers, the average monthly mortgage payment reached £1,057 (equal to 40% of an average gross salary) for the first time since November 2012. This could jump to as high as £1,114 per month if lenders pass on the Bank of England’s latest interest rate rise of 0.5%, with the base rate now at 2.25%. This will likely be raised again in the November MPC meeting, although we should see some of the uncertainty and volatility of gilts markets temper as markets settle on market values, making the outlook more predictable. The impact on households will be gradual (and somewhat of a timing lottery), given that of the c. 50% of UK housing stock with mortgages, 90% are on fixed rates. The market may see many future first-time buyers struggle to save enough deposit as a typical first-time buyer home is now priced 57% higher than 10 years ago, and as average salaries have increased by only 32% over the same time, they may find it increasingly difficult to save the necessary 10% deposit.

These factors combined have perhaps contributed to demand in the first-time buyer sector being down by 8% on the same period last year, however demand for first-time buyer type properties is still up by 27% compared with the five-year pre-pandemic average between 2015 and 2019. Although the stamp duty cut for first-time buyers is permanent, any increase in demand is likely to be steady rather than a surge.

The housing market continues to be extremely resilient even in the face of the economic changes that are stretching household finances. Some buyers may consider the rising cost of living as they look at their budgets and what they can afford. Even though demand has softened over the last few months, total demand is down by only 2% on the same period in 2021, and the stamp duty cuts could stimulate more demand. If there is a jump in prospective buyers competing for the limited number of properties for sale, it could lead to some unseasonal price rises over the next few months, offering more choice for buyers. When comparing supply and demand with the pre-pandemic five-year average, total buyer demand is up by 20% and the number of homes coming to market has risen by 16% during September compared to this time last year, which is a return to 2019 levels.

It is well known that the property market has been driven by a lack of supply for decades, in particular for new build homes, and Rightmove has seen that prime regional markets continue to thrive, predominately due to hybrid working becoming more conventional, which has increased the numbers of buyers looking for larger homes outside of London. They have also seen house prices remain strong in spite of the cost-of-living crisis and interest rate rises, as those with bigger budgets tend to be impacted less by these economic changes which has helped ensure that prime markets continue to flourish. 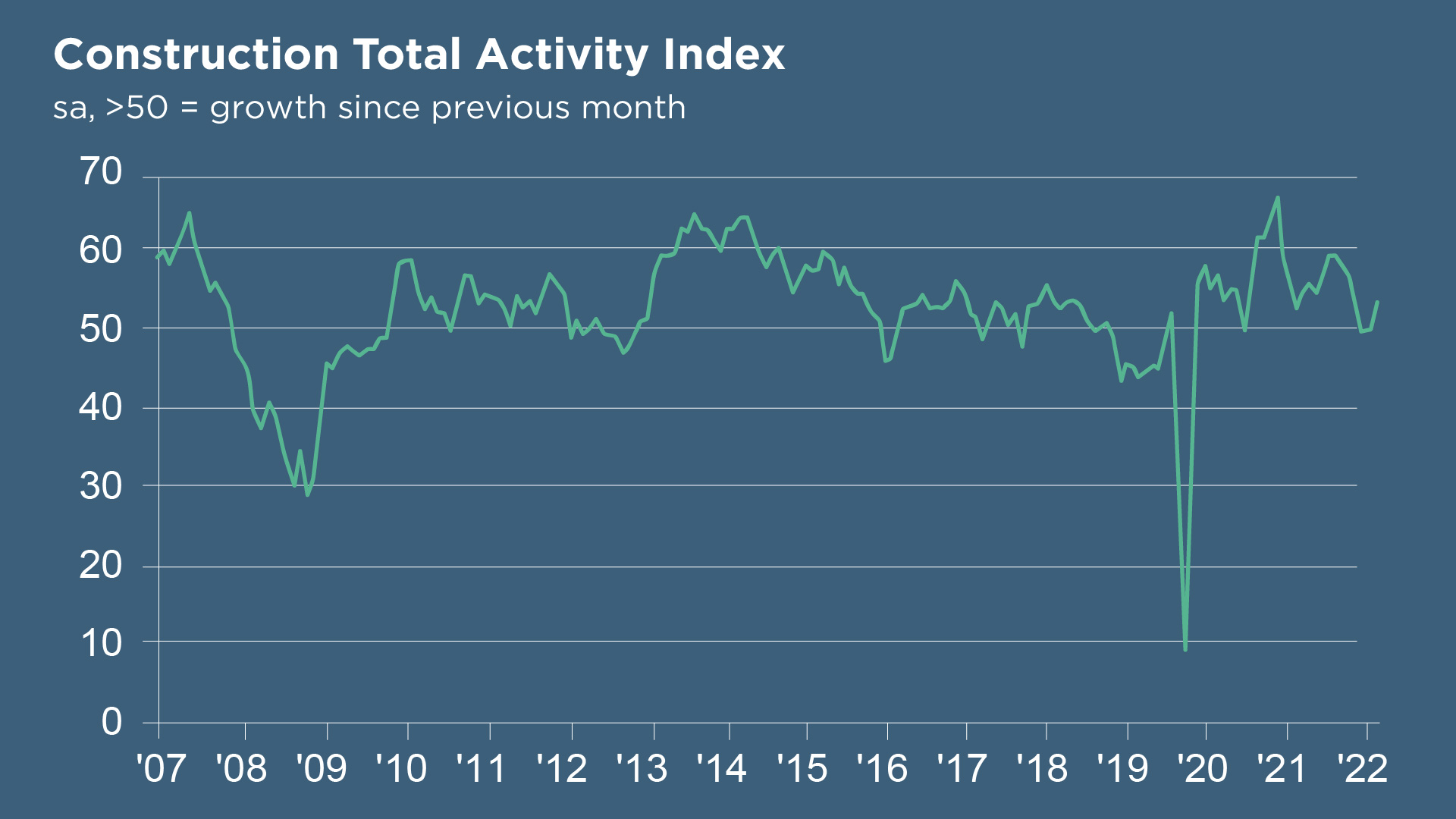 The headline seasonally adjusted S&P Global / CIPS UK Construction PMI registered at 52.3 in September, the highest reading for three months. House building was the best-performing category (index at 52.9), with growth reaching a five-month high. Whilst many survey respondents commented on a strong pipeline of outstanding work, incoming new orders appear to be relatively scarce as clients’ worries about the economic outlook are leading to slow decision-making, greater risk aversion and squeezed budgets. This reduction in demand has had a knock-on effect in purchasing activity, alongside improvements in supplier performance leading to a decrease in inventory building.

Meanwhile, employment growth accelerated from August’s 17-month low with c. 21% of respondents reporting a rise in staffing levels. Higher workforce numbers reflected efforts to boost business capacity, although construction firms continued to cite shortages of candidates to fill vacancies and strong wage pressures. Dr John Glen, Chief Economist at the Chartered Institute of Procurement & Supply, commented: "Developments in the UK economy have given the sector food for thought... The housing sector remained the strongest performer in September although with interest rates rising and mortgage costs affecting affordability rates especially for first-time buyers, this will be an obstacle for house building to keep up the momentum as we approach 2023."

These times of economic uncertainty mean that it’s even more important to have a lender that intimately understands the intricacies of the market. At CrowdProperty, we work closely and productively with the developers we back - tackling market, site and situational challenges together in partnership. As such, our team of property experts has been actively visiting sites to discuss project progress and offer input on any barriers which need to be overcome: 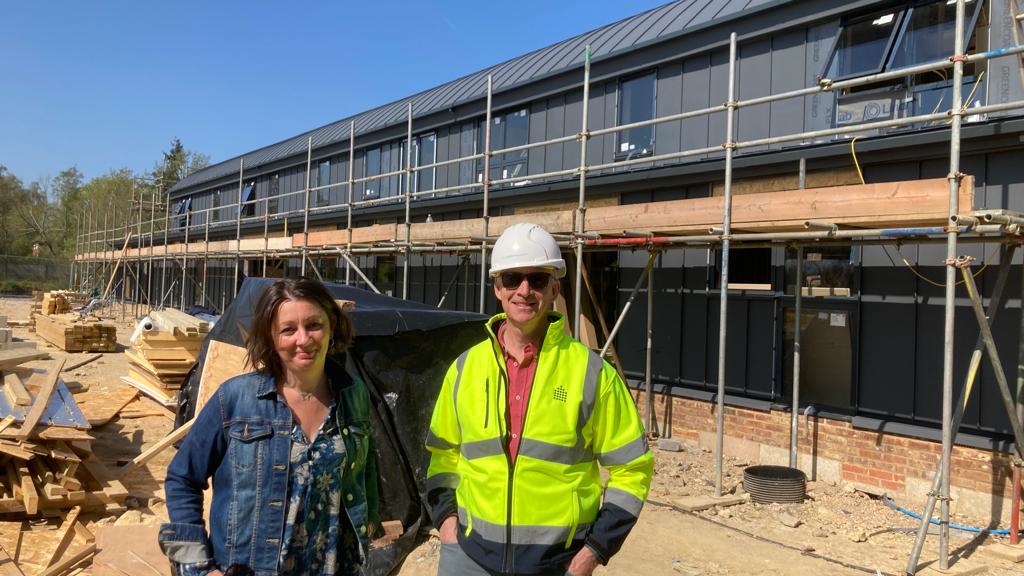 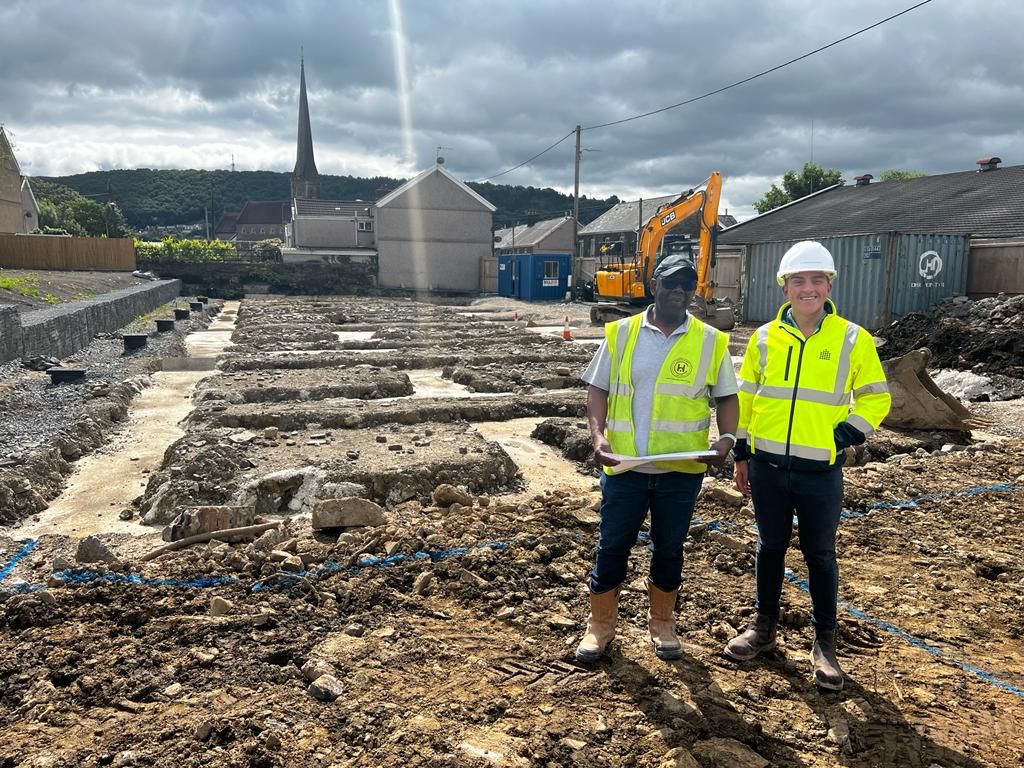 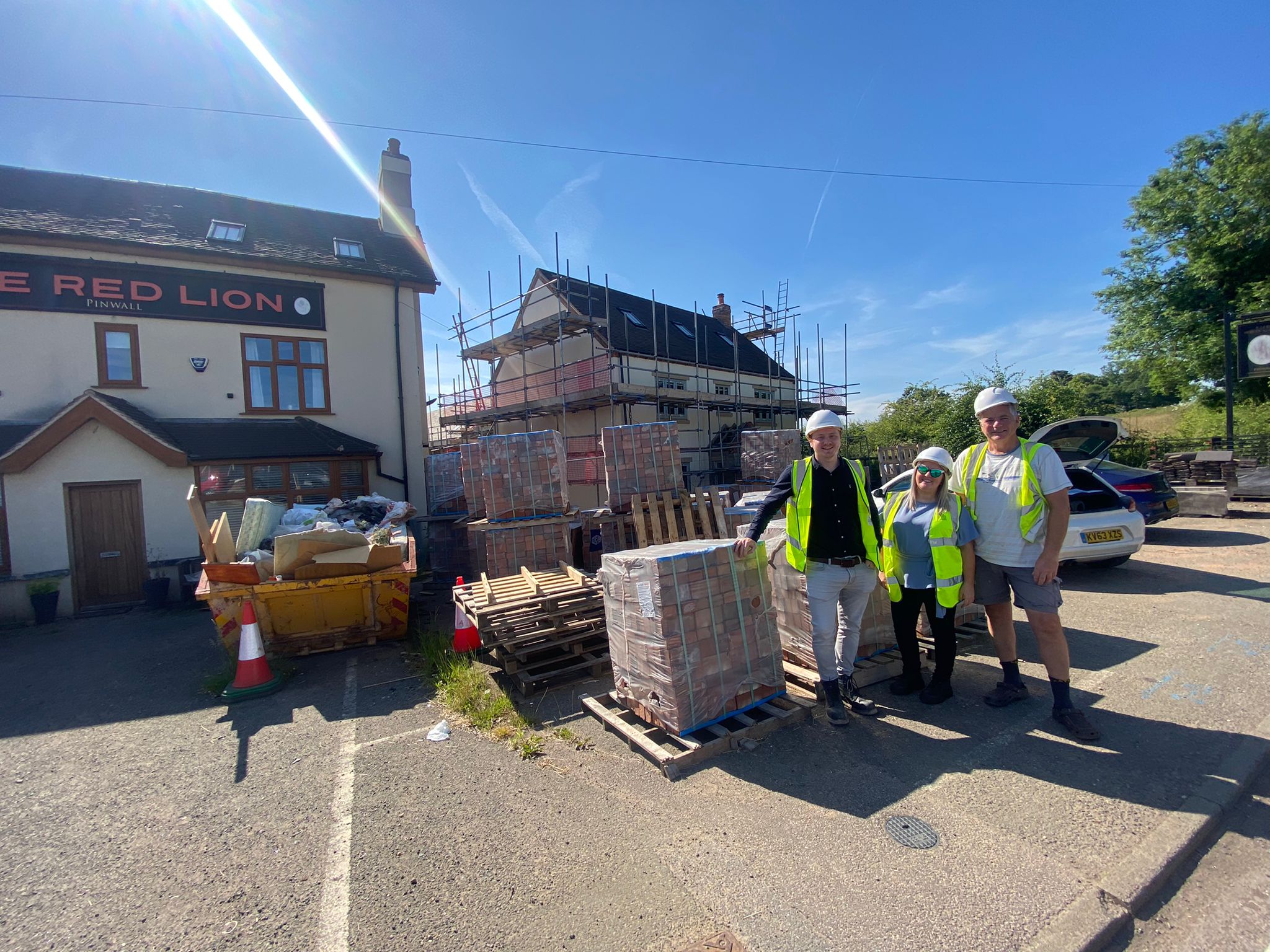 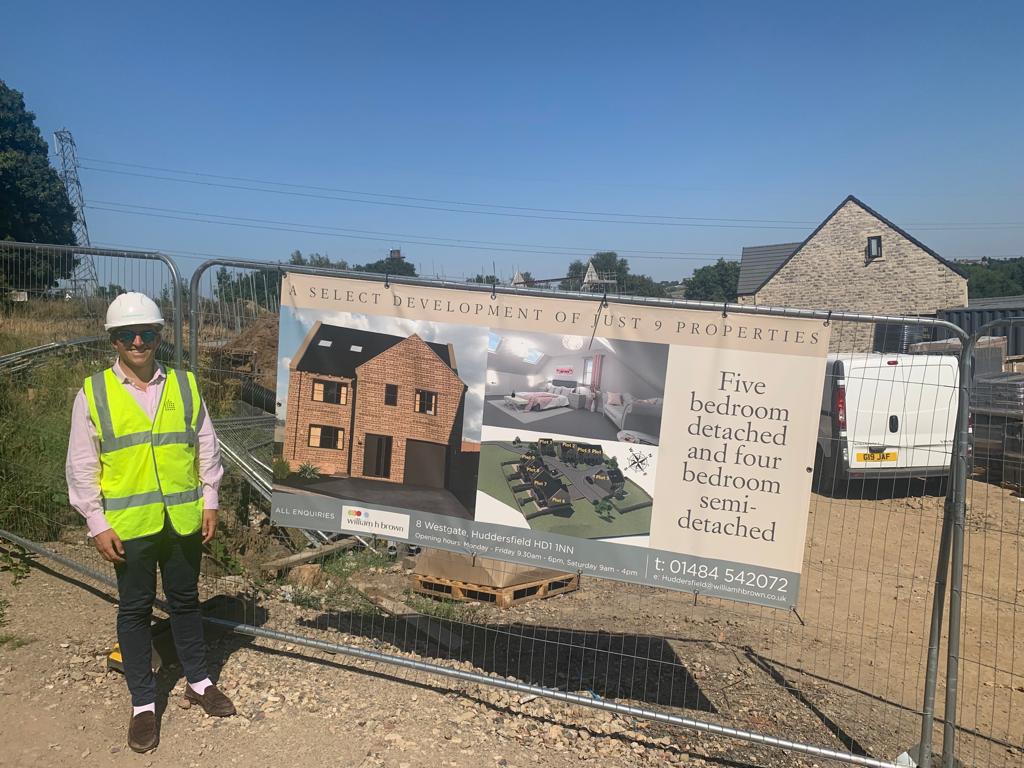 Many funders link their interest to the BoE base rate and we are already seeing the impact of these increases in the lending market with rising rates of interest on finance, the introduction of variable rate products and rates increasing in the period between offer and close, or even mid-project. Our sources of capital are not driving us to increase our rates, meaning we are able to offer guaranteed, fixed rate facilities for our projects with rates that won’t rise in the short term – offering reliable project development finance in uncertain times.

CrowdProperty is a leading specialist property development finance business having funded over £600m worth of property projects to date. With 250+ years of property expertise in the team, we provide property finance by property people and are here to help you succeed. Apply in just 5 minutes at www.crowdproperty.com/apply - our passionate team of property experts will share their insights and initial funding terms for your project within 24 hours, and go on to support the success of your project and help you grow your property business quicker.

CrowdPropertyUK
@CrowdPropertyUK
A reminder of some of the fantastic projects that our property experts have visited this year - North Walsham Road,… https://t.co/v69pFrgeLD