Viewpoint: State of the Market, January 2023 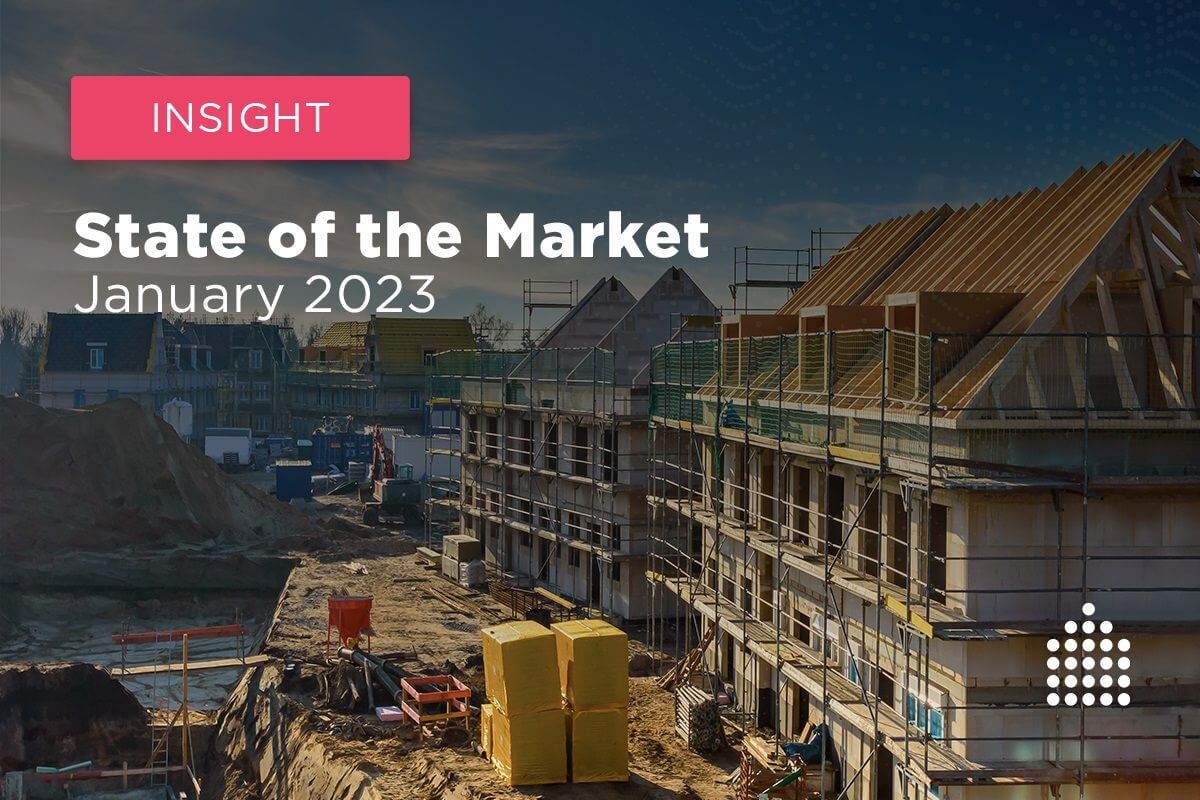 “As we enter 2023, the housing market will continue to be impacted by the wider economic environment… with house prices forecast to fall around 8% over the course of the year.”

Whilst the above statement from Kim Kinnaird, Director at Halifax Mortgages, may seem concerning to home owners (and good news for buyers), it is worth stating that this would see the cost of the average property returning to April 2021 levels – remaining significantly above pre-pandemic prices.

The rate of annual growth slowed across all nations and regions during December, dropping to +2.0%  from +4.6%. The North East saw the greatest impact as house prices rose by +6.5% (compared to 10.5% in November), closely followed by Scotland which now has an annual growth rate of +3.5% (versus +6.4% the previous month). Eastern England, the West Midlands and Wales were the regions which experienced the smallest drops, with growth rates of +5.5%, +7.3% and +6.1% respectively.

2022 saw rapid house price growth in the first half of the year, followed by a plateau in the summer with prices falling from September. Average house prices fell by -1.5% last month, as the impact of cost of living pressures and rising rates continue to effect household finances and demand. 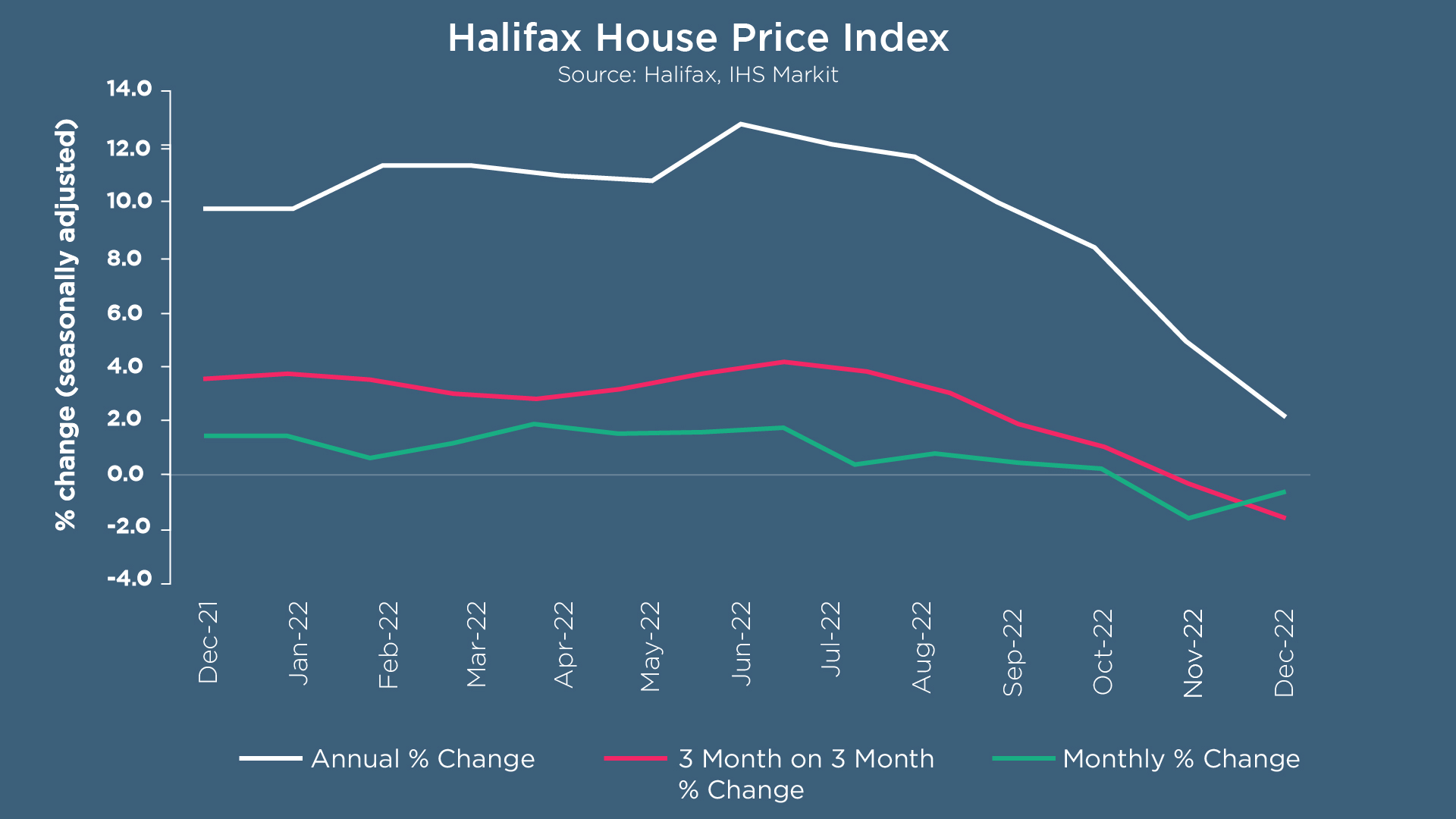 Rightmove suggests that the imbalance of supply and demand in the market is reducing, with expectations for a more settled housing market in 2023. A record number of sellers chose to list their homes on Boxing Day 2022, an increase of 46% compared to the previous year. This seasonal increase in supply means buyers will have the time and space to make sure they find the right home – as a result, it is anticipated that the time taken to sell a home will increase to around 60 days.

Despite the uncertainty caused by interest rate rises and high inflation last year, there are signs that buyers are still looking to move. Rightmove reports views of homes for sale were up 11% in December when compared to the same period in 2021. With more stability in the financial markets in the past few months, there has been an increase in the number of mortgage deals available. Many mortgage lenders have already factored in interest rate rises, meaning December’s uplift to 3.5% is unlikely to lead to an increase in mortgage pricing – in fact, some mortgage lenders have cut their rates in recent weeks.

Property expert Tim Bannister comments that “we’re heading towards a more even balance between supply and demand… but we don’t expect more significant price falls in 2023. This is reflected in [Rightmove’s] prediction of a relatively modest average fall of 2%.”

According to the latest Housing Census data, the number of households in England and Wales has increased by 1.4 million since 2011 – standing at 24.8 million in 2021. The number of new homes being built has failed to keep pace with this rise, contributing to the increase in house prices seen during the past 10 years, and it’s worth noting that the early pandemic lull in housebuilding starts is still to fully play through to lower completions, and therefore lower market supply.

The summary from Zoopla notes that the percentage of households who own their home has fallen during the past decade whilst the number of homeowners has increased. A third of people own their property outright, while 29.7% have a mortgage or own a stake in shared ownership property. As part of the government's drive to help more people to own their own home, a new Right to Shared Ownership scheme launched last month to enable people living in social and affordable housing to buy a share of between 10% and 75% in their property with either cash or a mortgage. This stake can be increased, known as staircasing, until the property is owned outright. The scheme is open to people in England and has several eligibility criteria, eg: the home must have been built under the government's Affordable Homes Programme 2021 – 2026 and the tenant must have lived in it for 12 months.

The number of people renting increased by 28%, with one in five renting a home in the private sector and c. 17% renting though a local council or housing association. Zoopla reports that there is currently a chronic lack of rented homes available – with fewer landlords investing in buy-to-let homes and a growing number selling up. Demand for rented homes is being driven by the strength of the labour market and is being compounded by higher mortgage rates. This low supply and rising demand situation is causing rents to rise as people compete for new homes, with average rents for new tenancies rising by 12% over the last year and by as much as 17% in London.

In terms of housing type, the survey states c. 78% of people lived in houses and bungalows; 22% lived in flats, maisonettes or apartments; and 0.4% lived in a caravan or other temporary structure. The number of households living in a flat or apartment has seen the biggest increase during the past 10 years, with an additional 500,000 households living in flats in 2021. People in London were most likely to live in a flat at 54%, compared with 21.6% in the South East and just 11.4% in the East Midlands. More than three-quarters of households owned a vehicle, with 41.3% households owning at least one car or van, while 26.2% owned two vehicles and 9.2% owned three or more. Unsurprisingly, the highest concentration of households that did not own a vehicle was in London at 42.1%, rising to 77.2% in the City of London.

The S&P Global / CIPS Construction PMI reports that activity and new work declined at the quickest rates since May 2020 last month. December saw the end of a three-month sequence of growth across the sector, with job cuts reflecting the pessimistic outlook for the year ahead. The drivers of this negative sentiment include weak client demand, higher costs for energy, materials and imports, and the expectation of a recession.

The headline seasonally adjusted index registered at 48.8 in December, down from 50.4 in November. Commercial construction activity continued to rise (index at 50.3), however this uplift was outweighed by contractions across the residential and civil engineering sectors. Housing activity marginally declined for the first time since July 2022 (index at 48.0).

Dr John Glen, Chief Economist at the Chartered Institute of Procurement & Supply, commented: "House building saw a notable change of direction, with a mix of higher inflation for raw materials and transportation and the squeeze on affordability rates for mortgages resulting in fewer house sales. The sector subsequently fell back into contraction for the first time since July… Builders are fast running out of the resilient spirit maintained over the last couple of years as the blocks to success piled up and the winter of discontent with high inflation, strikes and shortages continues." 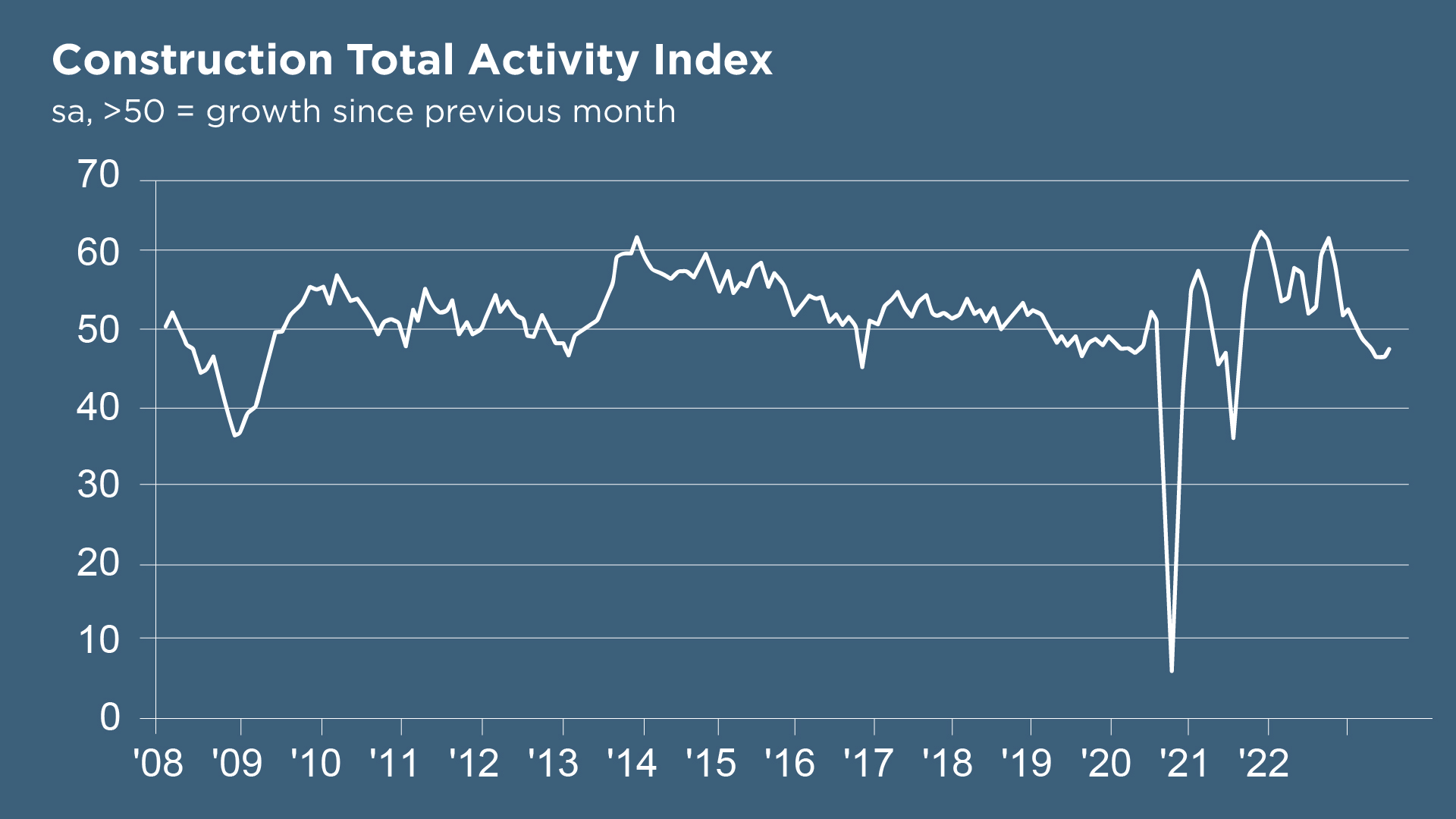 The latest EY ITEM Club viewpoint on the economy predicts that GDP will fall in H1 2023. This is against a backdrop of consumers continuing to struggle with high inflation and the impact of last year’s interest rate rises still to be realised, even though November’s results showed 0.1% GDP growth, after a 0.5% growth in October. There is an expectation that the bank rate will rise further in the short-term despite division of views on the Bank of England Monetary Policy Committee, alongside the fiscal stance tightening significantly from April 2023 as a series of tax rises are implemented and support for energy bills is reduced.

Regarding the construction sector, Martin Beck, chief economic advisor to the EY ITEM Club, said the “fall in activity was not surprising. With a slowdown in the housing market and an expected outright fall in house prices, it’s likely the appetite for new home construction has deteriorated… Construction is likely to continue to be aided by the more targeted scheme which is expected to replace current support in April.

“No doubt, the sector faces a difficult period ahead. But as a relatively cyclical industry, construction could be among the first to benefit when the economy begins to recover.”

CrowdProperty is a leading specialist property development finance business having funded over £630m worth of property projects to date. With 250+ years of property expertise in the team, our distinct ‘property finance by property people’ proposition means that we understand what developers are looking to achieve and help those developers succeed.. Apply in just 5 minutes at www.crowdproperty.com/apply - our passionate team of property experts will share their insights and initial funding terms for your project within 24 hours, and go on to support the success of your project and help you grow your property business quicker.