As of February, the UK appears to have handled the Omicron outbreak that was seen over the Christmas period. Following this, Boris Johnson has lifted Plan B measures for England and consumer output has risen. In response, CrowdProperty looks at the latest market commentary and what this will mean for the sector going forward. 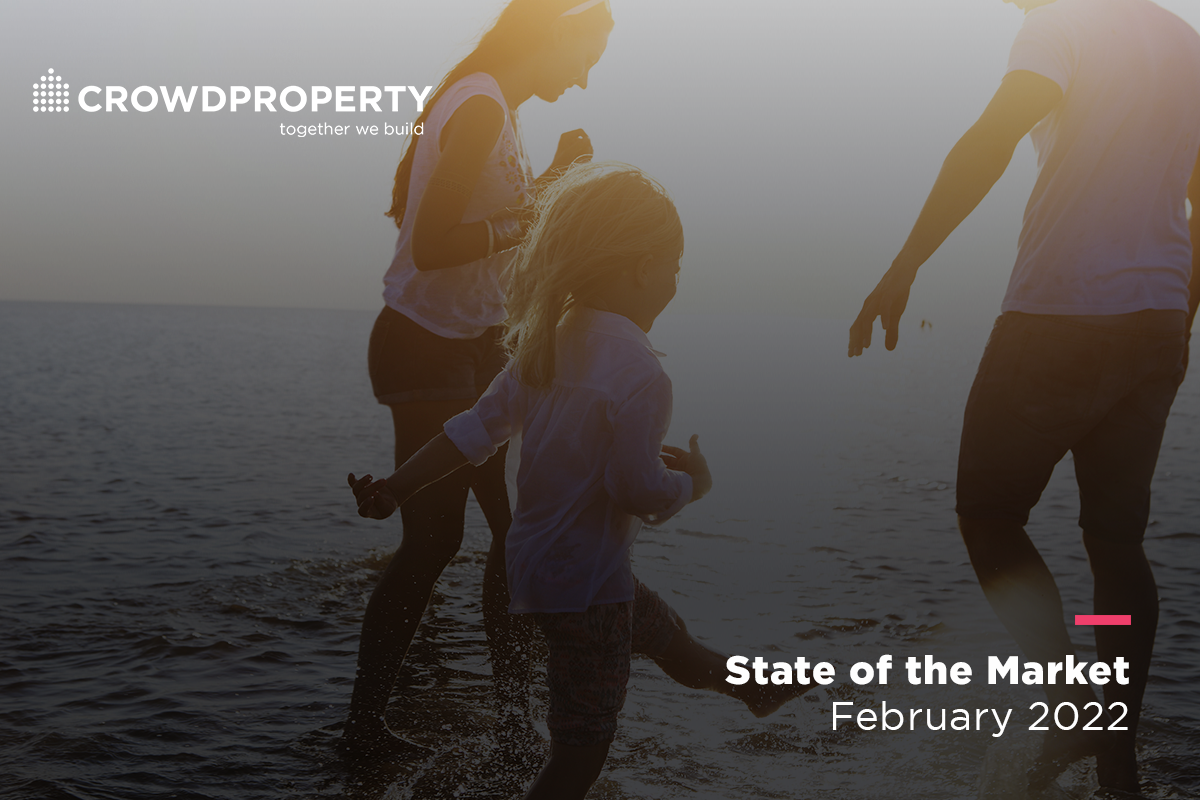 The latest data from Halifax reveals that house price growth somewhat slowed in January to +0.3%, which is the lowest rise since June 2021. However, the limited supply of housing stock has meant that prices will remain buoyant – a steady growth of 9.7%. The average housing price has again reached new record highs of £276,759 which is around £37,000 more when compared to the same period two years ago.

Halifax’s report may be a sign of things to come, as transaction volumes are starting to return to pre-pandemic levels. A key factor behind this will be issues surrounding affordability, which are at historically low levels as house prices continue to outstrip earning growth. It remains that younger generations still face many obstacles when looking to buy a house because of the challenges surrounding deposit requirements. And yet, despite difficulties, Nationwide has commented this month that “housing demand has remained robust, with mortgage approvals for house purchase running slightly above pre-pandemic levels.” This was also noted by Rightmove which recorded its highest ever number of Boxing Day sellers coming to the market - evidence that the trends seen last year have carried over into 2022.

This was also seen across different regions: Wales is by far the strongest performing area in the UK with an annual house price inflation of 13.9%, which is slightly down compared to December’s statistics - the average house price is now £205,253. In Northern Ireland, January saw prices up by 10.2% on last year - meaning property prices now average £170,982.

Regarding prices in England, the North West was yet again the strongest performing region with the UK’s second highest annual growth rate of 12.0% year-on-year. There are signs that the housing market is returning to its pre-pandemic levels. This month, London doubled the December recorded rate for house price increases, which puts it at 4.5% - the strongest performance in over a year. 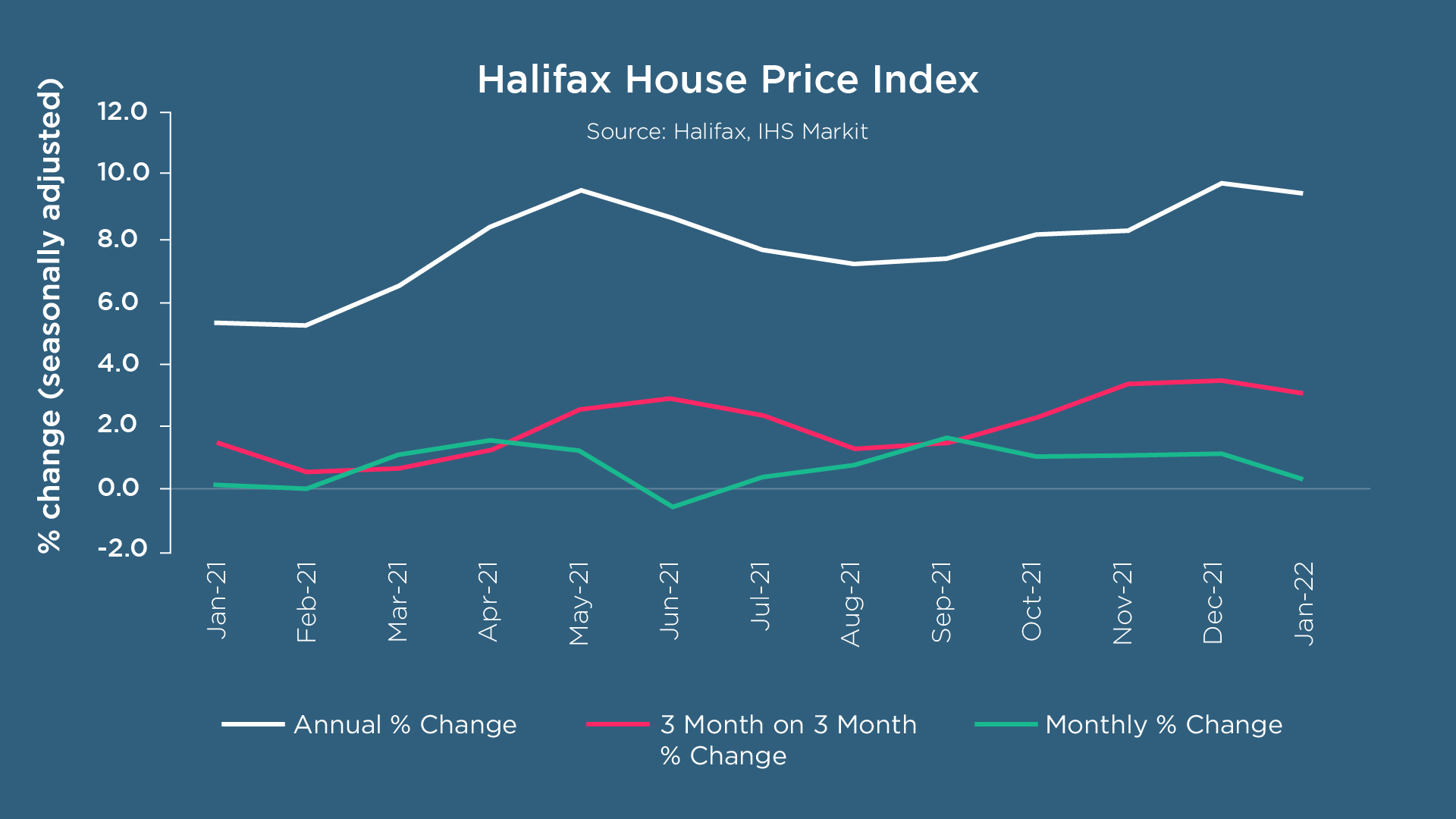 Given this, Russell Galley, Managing Director at Halifax, commented: “While the limited supply of new housing stock to the market will continue to provide some support to house prices, it remains likely that the rate of house price growth will slow considerably over the next year.” In addition to this, while housing price inflation will be considerably cooler compared to last year, the EY ITEM Club has predicted that this will not lower the price of houses for 2022.

This month, The Office of National Statistics has reported that total construction new orders increased by 9.2% - which equates to £1,121 million in Q4 2021 - compared to that of Q3 2021, meaning that total new orders are now at an all-time high of £13,326 million.

These trends have maintained as the latest reports from IHS Markit note that construction sector activity has increased for the 12th consecutive month. Confidence is rising as new orders received by construction companies in January rose at the fastest pace since August 2021, and buying input was the strongest for six months. The headline seasonally adjusted IHS Markit/CIPS UK Construction PMI® Total Activity Index is now at 56.3 which is up from 54.3 in December.

This strong pipeline of new work has also meant an encouraging amount of staff hiring has taken place - the best month for job creation since last October. Similarly, the uptake in new projects has meant that input buying has picked up at the start of 2022 in an attempt to accumulate stock for upcoming projects. Despite there being a spike in demand for materials, the supply pressures are continuing to ease.

It has been noted that the lack of reliable transport has led to 34% of supply chain managers reporting that their materials were taking longer to arrive, however this is significantly less than October’s report of over 60% stating supply delays. Duncan Brock, Group Director at the Chartered Institute of Procurement and Supply, commented that there is “light at the end of the tunnel where supply chains showed signs of improvement and the best delivery times since September 2020.”

Overall, the latest survey stated that construction companies remain positive about the business outlook and there are expectations that the UK economy will recover swiftly in 2022. 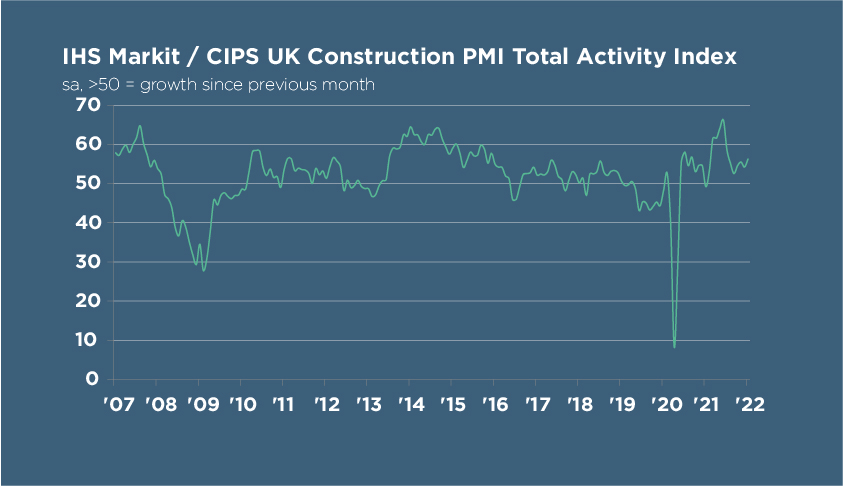 As for current employment levels, the Office of National Statistics has reported that at the end of January, job vacancies rose to a new record of 1,298,400, which was an increase of 513,000 from pre-coronavirus months. The number of payrolled employees saw another monthly increase of 108,000 in January to a record 29.5 million people.

The emergence of Omicron initially slowed GDP growth in December – however, more recently, EY ITEM Club reported that data suggests social consumption has recovered as the number of COVID-19 cases has reduced. Given that the issues surrounding Omicron are decreasing, it has been noted that the new challenge the UK faces will be more conventional: high inflation. Consumers will be facing larger restrictions on their spending ability in more than a decade. Consequently, EY ITEM Club expects that GDP growth for 2022 will be slower compared to that of 2021. Furthermore, it is thought the Bank of England will add to recent rises in interest rates by raising rates twice more this year, pushing up mortgage rates.

That’s where property finance by property peoples makes so much sense – at CrowdProperty we work closely and productively with the developers we back, tackling market, site and situational challenges together in partnership. Having been developers ourselves, we are laser-focused on solving the pains of small and medium sized developers, which is why working with CrowdProperty increases the likelihood of success of projects.

CrowdProperty is a leading specialist development finance lender, having funded £420m worth of property projects. Apply in just 5 minutes at www.crowdproperty.com/apply and our passionate property experts will share their insights and initial funding terms for your project within 24 hours.