September is the final month in which people buyers can experience some benefit from the stamp duty holiday. As schools return and the frenzied buying activity starts to slow, CrowdProperty reviews the latest market commentary and what this means for the sector going forward. 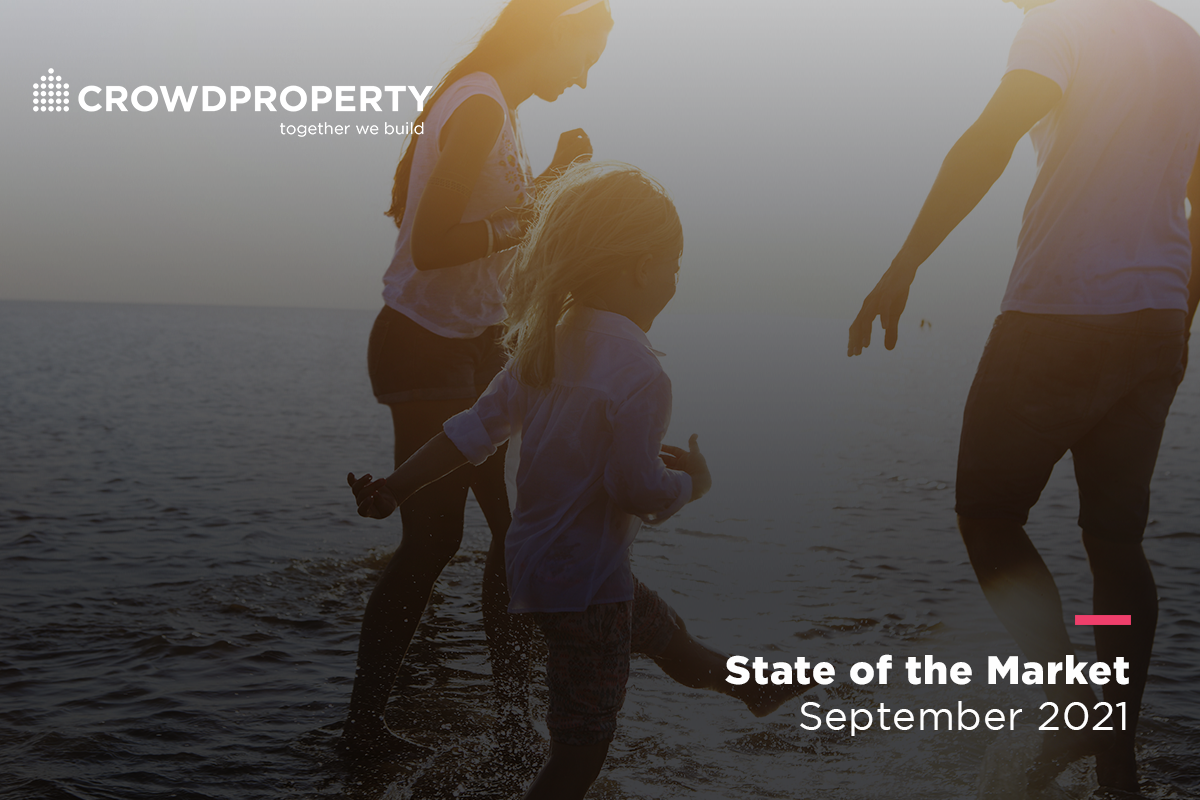 This month, Halifax reported that the average house price climbed again in August with a monthly increase of 0.7% which, compared to previous months, is still showing signs of the rate of house price inflation further slowing to a five-month low of 7.1%. Given this, the average UK house price is now £262,954, beating the previous record of May’s £261,642. In comparison to previous months, August activity was relatively modest with cost of property increasing by £1,789.

Russell Galley, Managing Director at Halifax, commented that “compared to June 2020, when the housing market began to reopen from the first lockdown, prices remain more than £23,000 higher (or 9.9%).”

It’s worth noting that whilst the Nationwide House Price Index shows that nominally house prices are 32% above the 2007 peak, real (inflation-adjusted) prices remain 10% below 2007 highs.

The slowing of increased housing prices was felt across every region, however Wales remains the strongest performing area with annual price inflation of 11.6%  - the only double-digit rise recorded in the UK during August. Similarly, the South-West is also experiencing strong growth at 9.6% which reflects the ongoing desire to move to rural areas with more space.

In contrast, areas such as Greater London continue to struggle compared to other regions, registering just a 1.3% annual increase to August. The year-on-year rise in London was the weakest it had seen in 18 months, although properties still remain far above the national average price (£508,503).

Much of the influence of the stamp duty holiday has left the market which has been highlighted by the drop in the number of transactions compared to a year ago. However, a number of key drivers have kept activity high and house price inflation up - one of which is people’s motivation to find homes that suit a greater working from home lifestyle.

To compete with the higher buyer activity, Rightmove has reported that a popular tactic has been to sell before buying. In some cases, people have been selling their property and then moving into rented accommodation short term whilst they search for a new home to buy. Because of this, the average time for a newly listed property to be marked sold subject to contract is the quickest ever at 36 days.

Russell Galley went on to say that “these trends look set to persist and the price gains made since the start of the pandemic are unlikely to be reversed once the remaining tax break comes to an end later this month.” 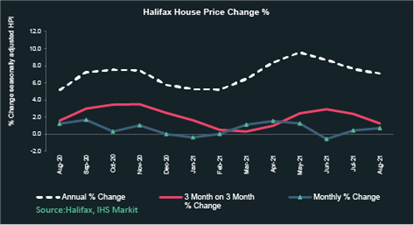 August saw an increase in volume output for the construction industry, however the overall pace has eased compared to figures from previous months. The IHS Markit/CIPS UK Construction PMI® Total Activity Index (which indicates the direction of change in output month-on-month) now stands at 55.2, down from 58.7 in the previous month.

Total construction starts increased yet again for the 15th consecutive month. As normal operating levels are underway, businesses have noted more projects are resuming that were previously delayed by COVID-19. On top of this, Martin Beck, Senior Economic Advisor to the EY ITEM Club, commented that the “less stringent isolation rules since mid-August should reduce the scale of virus-related disruption. Meanwhile, construction firms now have a strong incentive to boost efficiency and productivity”.

It has been said the outlook for the construction sector remains very healthy. Structural factors – such as higher demand for larger, out-of-town properties and retail-to-residential conversions in cities – will support new home building.

The synchronised recovery of the rest of the world means delays to the supply chain is still a widespread pain felt by companies, with input prices accelerating to the second sharpest in the history of the survey. IHS Markit commented: “Ongoing material shortages were exacerbated by lack of transport and freight availability, compounding existing issues related to the supply of materials due to port congestions and demand and supply imbalances.” Materials most effected by cost inflation are concrete, fuel, steel and timber, although commodity market lead indicators such as US Timber Futures are now at their lowest value for 9 months. 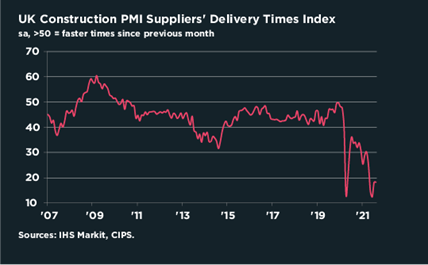 EY ITEM Club noted that retail sales have fallen as spending patterns have normalised which is influenced by the greater opportunity for social consumption. Despite this, the construction sector is still performing better than the economy as a whole but this is likely to lessen as we move through the second half of 2021. GDP growth is now 0.1% month-on-month which is the smallest increase experienced this year.

According to Martin Beck, the lowering of infection numbers and less strict isolation rules signal “the promise of strong rebounds in consumer spending and business investment… the EY ITEM Club continues to believe that the economy is likely to grow by more than 7% this year.”

The IHS Markit survey reported that the construction industry has sustained demand for new workers because the lack of skilled workers has continued to affect the rate of hiring. Duncan Brock, Group Director at the Chartered Institute of Procurement & Supply, noted that employers are trying “to fill the gaps in capacity left behind by employee moves, overseas worker availability and brought on by skills shortages.”

The number of job vacancies in the UK has risen above 1m for the first time in the last 3-month period. Tony Wilson, Director of the Institute for Employment Studies, commented that “the biggest risk we’re facing is not enough workers rather than not enough jobs.”

With employment growing and the amount of people joining the labour force increasing, The Office for National Statistics has reported that unemployment fell to 4.6% - meaning a further 241,000 people were added to the payroll in August 2021. This now means that the number of people employed stands at 29.1 million, returning to  pre-pandemic levels.

Resumption of many construction projects means that the general consensus remains positive on growth prospects for the coming 12 months and at the macro-level, EY ITEM Club’s latest forecast expects 6.5% GDP growth in 2022.

Furthermore, Russell Galley commented that “the macroeconomic environment is becoming increasingly positive, with job vacancies at a record high and consumer confidence returning to pre-pandemic levels. Coupled with a supply of properties for sale that looks increasingly tight, and barring any reimposition of lockdown measures or a significant increase in unemployment as job support schemes are unwound later this year, these factors should continue to support prices in the near-term.”

CrowdProperty has funded over £350,000,000 of property projects, changing the game of property project finance for SME developers - apply in 5 minutes and get value-adding expert advice and terms within 24 hours at www.crowdproperty.com/apply.