Now that stamp duty rates have returned to their pre-pandemic levels and the furlough scheme has come to an end, the period of extraordinary growth is tapering off as the market has begun to cool. Given these signs, CrowdProperty reviews the latest market commentary and what this means for the sector going forward. 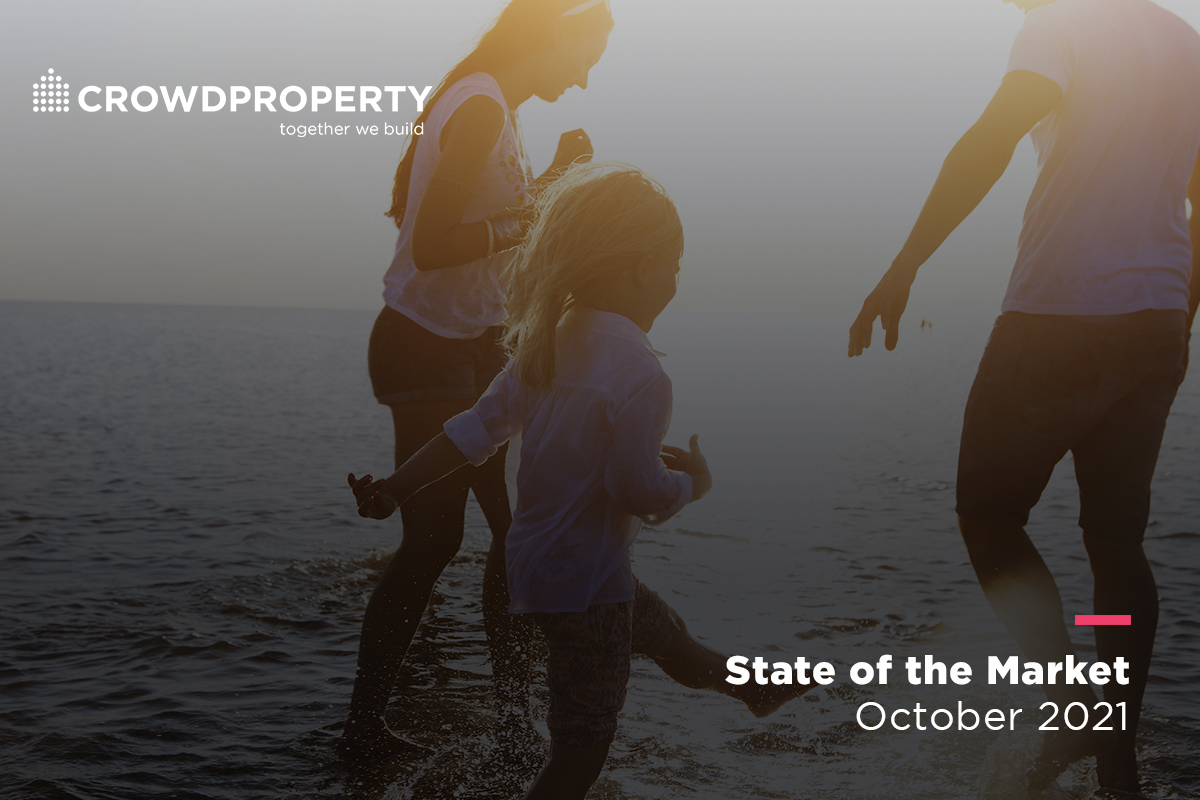 Yet again, the UK's housing price growth has slowed as Halifax reports that in September house prices rose by 1.7%, which has added a further £4,400 to the value of the average house - reversing a three-month downward trend in annual growth. It is assumed that the end of the stamp duty holiday and buyers' desires to close deals speedily may have influenced these latest figures. Russell Galley, Managing Director of Halifax states that “the price of an average house is now as expensive as it has ever been, standing at just over £267,500". That is, of course, in nominal terms - in real (inflation adjusted) terms, current levels remain c.10% below 07/08 real value highs.

The ‘race-for-space’ still remains at the forefront as a key influencer of people’s buying behaviours and reason for price increases. This is evidenced by Halifax who reported that over the year, prices of flats have increased just 6.1%, compared to 8.9% for semi-detached properties and 8.8% for detached properties. In terms of cash, this equates to almost £41,000 compared to just a £6,640 increase for flats (driven also by different average values of houses vs flats).

People’s desire for homes with more space has continued to have an affect on different regions. Wales persistently remains the strongest area for house price inflation with an annual growth of 11.5% as of September, with prices now standing at £194,286 on average. Similarly, Scotland continues to outperform the UK on national average prices with a 8.3% growth.

Although price inflation is still causing some pains for home-movers, Rightmove predicts the outlook to be a “better-balanced autumn moving season” after their latest market data shows some early signs of a much-needed increase in the number of properties coming to market. The first two weeks of September saw an increase of 14% in the number of new listings compared to the last two weeks of August.

Rightmove commented that “more choice of properties encourages more current owners to come to market if they are looking for an onward purchase”. This creates hope that greater liquidity will help ease further upward price pressure. 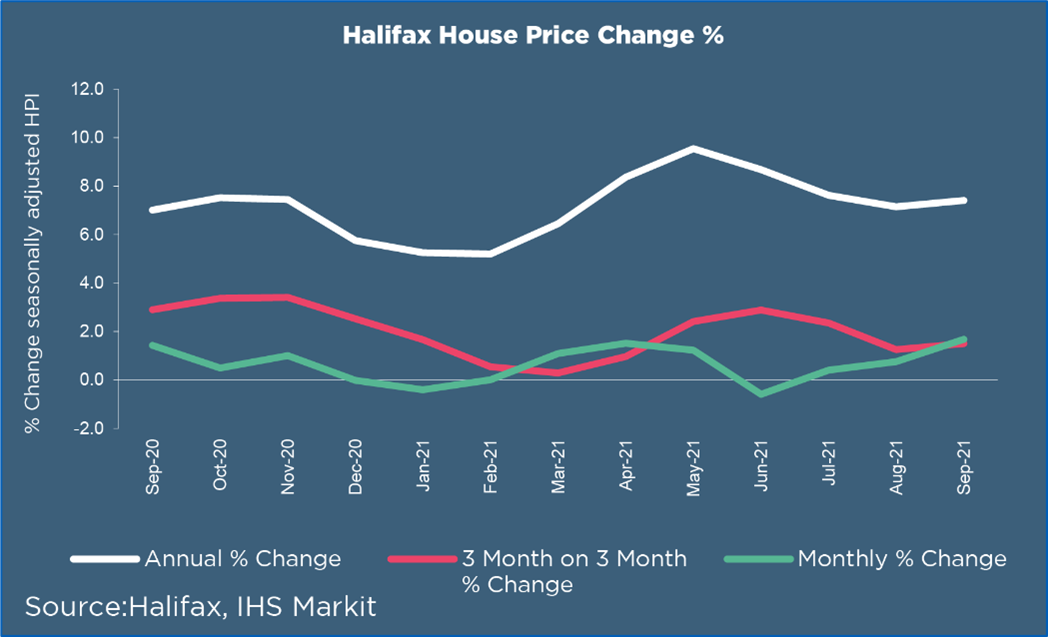 However, this view is not shared everywhere as EY ITEM Club predicts that regardless of the fact that the stamp duty holiday has ended, the race for space will still remain a driving factor in housing prices. Martin Beck, senior economic advisor to the EY ITEM Club, stated that “the EY ITEM Club thinks their persistence will prevent any serious correction in property values”.

The latest IHS Markit data shows that in September, the construction sector experienced another growth slow down as output volumes rose to the smallest extent for eight months. This is because the construction sector is ever facing obstacles as material shortages and lack of transport continues to hinder progress. Tim Moore, Director at IHS Markit, commented that “the volatile price and supply environment has started to hinder new business intakes”.

Duncan Brock, Group Director at the Chartered Institute of Procurement and Supply, added that “housing and civil engineering bore the brunt of the slowdown with residential building the weakest since June 2020”.IHS Markit’s latest data pointed to the worst month for order books since January's lockdown. Consequently, the IHS Markit/CIPS UK Construction PMI® is now down to 52.6 in September from 55.2 in August.

Duncan Brock also commented that “unless stronger supply chain performance is nailed down along with headcount, we are heading towards a stagnant autumn because the sector is certainly not on an even footing”. 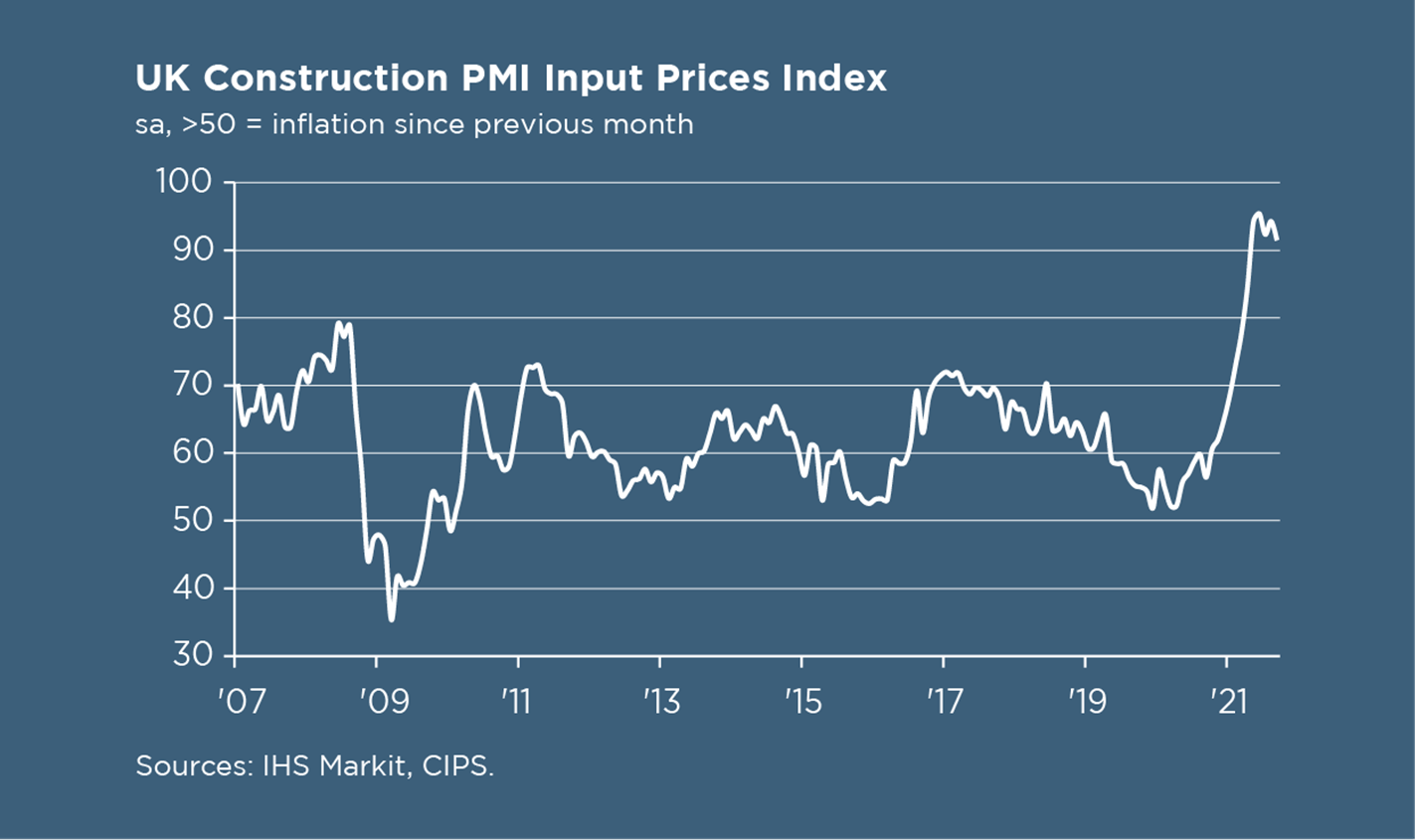 It has been noted across the entire construction sector that there is a considerable decline in sub-contractor availability and subsequently these businesses have been charging more for their services - the fastest rate of increase since the survey began in April 1997.

The job market as a whole continues to boom as the number of job vacancies in July to September 2021 was at a record high of 1,102,000 - an increase of 318,000 from its pre-pandemic levels (January - March). This was the second consecutive month that the three month average was over one million, with 12 out of 18 categories reporting a record number of job vacancies.

EY ITEM Club describes the economy to be “experiencing some headwinds” as we move into the final quarter of the year. It estimated that households have accumulated an excess in savings from the pandemic of around £170bn - however, rising inflation driven by significant increases in energy prices and cuts to Universal Credit will be affecting people’s spending abilities. Furthermore, narratives surrounding supply chains whether true or not are said to be holding back further economic activity. Consequently, the economy is now 0.8% below its pre-COVID-19 size.

Experts now predict that demand will begin to soften in the coming months, given the economic influences, with Martin Beck summarising that “growth will likely slow over the rest of this year, the expansion should prove to be down, but not out”.

Despite lower levels of buying activity, low borrowing costs and improving labour market prospects for those already in employment are likely to continue to provide support in the coming months.

Apply in 5 minutes and get value-adding expert advice and terms within 24 hours at www.crowdproperty.com/apply.