Now that the furlough scheme has come to end and with Black Friday and the Christmas holidays approaching, CrowdProperty reviews the latest market commentary and what this means for the sector going forward.

2021 has been described as “the year of the power buyer”, as the average housing price appears to be unaffected by the absence of the stamp duty holiday. Halifax reports that the UK average house price has hit a record high, now averaging £270,000, meaning figures have risen for a fourth consecutive month and an overall price inflation of 8.1%. Since the start of the pandemic (April 2020), the value of property has increased by around £31,516 (13.2%).

England consistently remains the weakest performing region, in comparison to Wales which is yet again still experiencing the strongest growth in housing prices at a rate of 12.9%. Similarly, Northern Ireland has recorded its strongest growth in four months (11.3%, average house price of £169,308).

From these latest figures, it is predicted that the Bank of England will react to building inflation by raising rates and this will be something that is seen over the next 12 months. Russell Galley, Managing Director at Halifax, stated that these increased borrowing costs mean “we do expect house buying demand to cool in the months ahead." 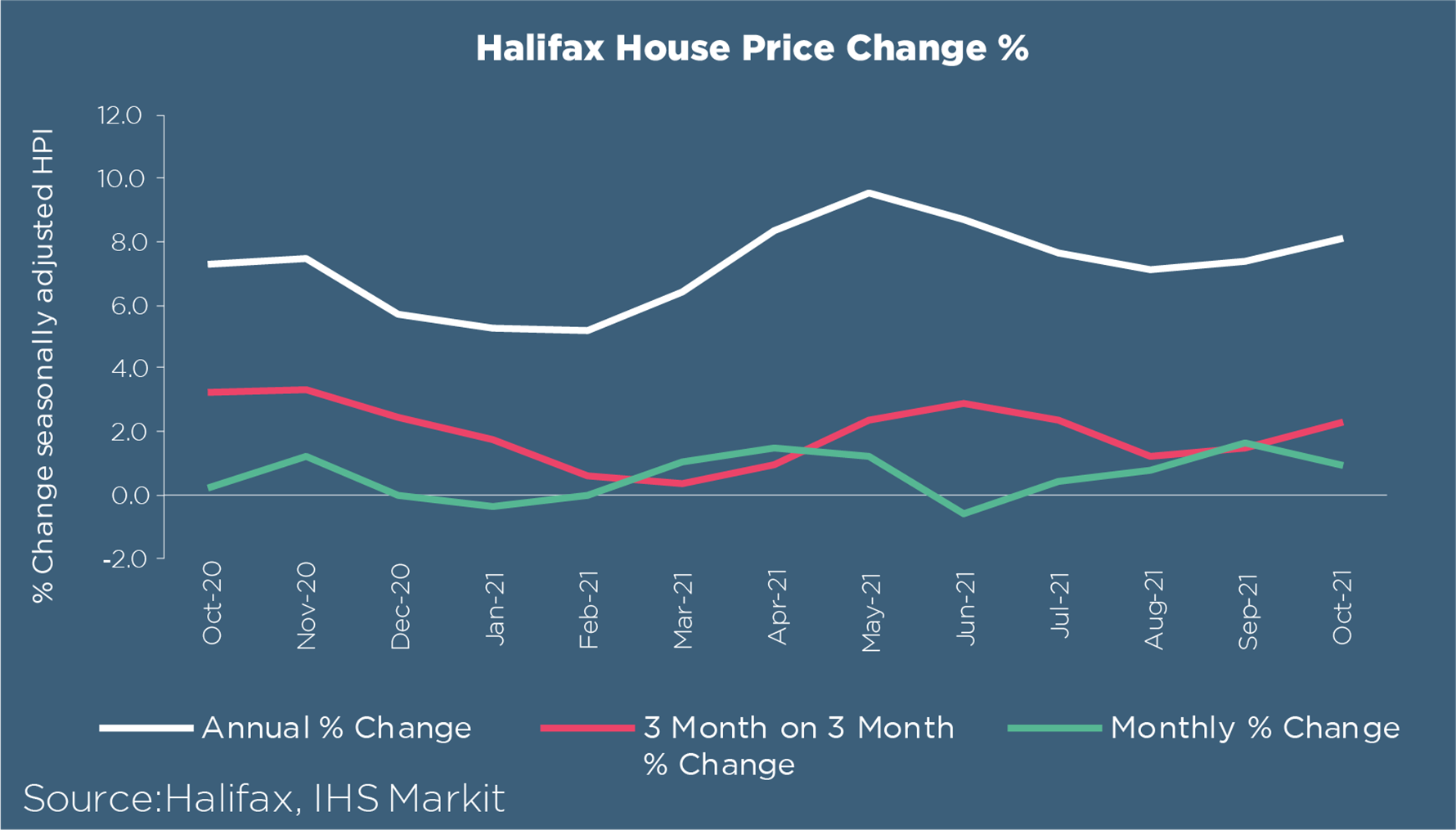 According to Rightmove, there has been a further increase in the number of properties coming to the market - however, the stock level is still not sufficient to replenish the houses that are being snapped up. Furthermore, Rightmove has stated that this is the first time since March 2007 that a “full house” has been recorded. This is an extremely rare event meaning that all three market sectors (first-time buyers, second-stepper and top of the ladder) across all regions of Great Britain have hit new record price highs.

Tim Bannister, Rightmove’s Director of Property Data, commented that “the stock shortages started after the first lockdown, and they look set to continue with the underlying housing market fundamentals remaining strong, and an additional incentive to buy and fix your mortgage interest rate before a widely expected rate rise.”

In comparison to last month, business activity has picked up for the UK construction sector. However, companies have cited that the constraints around supply chains have prevented the growth being anywhere near as rapid at the 24-year high that was seen in June. Consequently, this continues to increase the purchasing prices although IHS Markit reports that this trend is the least severe it has been since April.

House building has replaced commercial work as the strongest performing category in the  construction sector with residential work increasing the fastest in three months. This month’s survey has reported that this boost is influenced by loosening pandemic restrictions, allowing the sector to regain some momentum.

Access to building materials continues to be an issue, however Tim Moore, Director at IHS Markit, suggests that “the worst phase of the supply crunch may have passed” with the latest surveys reporting that the number of firms citing supplier delays fell to 54% in October, down from 63% in September. This is a vast decrease compared to the 77% that was recorded in June. Tim Moore reported that the “IHS Markit/CIPS UK Construction PMI® Total Activity Index registered 54.6 in October, up from 52.6 in September, to signal a robust and accelerated rise in output volumes.”

Duncan Brock, Director at the Chartered Institute of Procurement and Supply, claimed that “a slight moderation in input price inflation also gave hope to builders that price rises were receding, which could mean fewer delayed projects as costs were reviewed.” This was also reflected by October experiencing “the fastest rise in purchasing for three months as builders continued their summer bounce into the autumn.”

Whilst these latest statements appear to herald an improvement in the situation, widespread reports have noted that material and staff shortages have disrupted work on site which, when coupled with rising fuel and energy prices, has further exacerbated the situation. Martin Beck, senior economic adviser to the EY ITEM Club, commented that “anecdotal evidence suggests supply chain challenges won’t be completely resolved until the second half of 2022.”

Overall, the latest figures suggest that the near-term outlook for construction growth remains positive, with Duncan Brock commenting that "the next 12 months will be rosier.”  The issues surrounding staff and supply mean that it is still uncertain that we’ve moved past instability but nevertheless the level of optimism is rising. 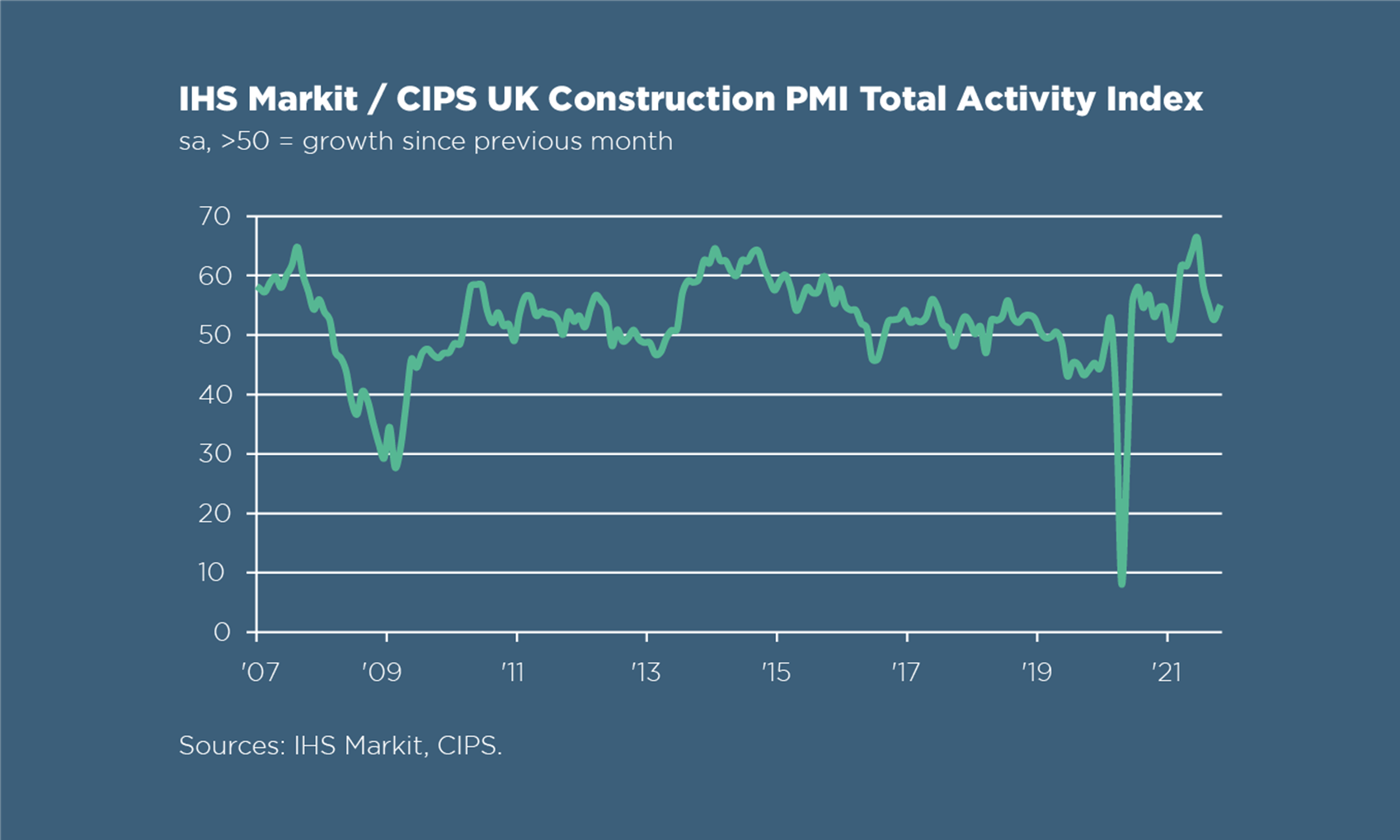 The end of the furlough scheme appears to have had no effect on the number of people in employment with The Office for National Statistics (ONS) reporting that a further 160,000 workers were added to payrolls in October, taking the total to 29.3 million. Impacted by the construction industry, the highest level of job advertisements continues to be in the transport, logistics and warehouse sector, which is up 423% in comparison to February 2020.

It is reported that overall household net worth is the highest it has ever been, which is largely down to people accumulating savings of around £150bn over the course of the pandemic. Despite this, economists believe that this is unlikely to materialise into consumer spend in the weeks leading up to Christmas. According to a study by the Institute for Fiscal Studies, much of the savings built up during the pandemic will remain in household bank accounts until the economic outlook is more upbeat. Questions on inflation are thought to damage consumer confidence thus consumer spending hasn’t bounced back to its pre-pandemic levels as quickly as originally predicted - nevertheless, consumer spending will remain robust with OBR now predicting that GDP growth this year will be around 7%, which is a significant difference from the previous forecast of 4%.

EY ITEM Club’s Autumn forecast summarised that the outlook is cautiously optimistic but it is thought that the strength of the current labour market will support wages and keep the market buoyant.

Apply in 5 minutes and get value-adding expert advice and terms within 24 hours at www.crowdproperty.com/apply.