Boris Johnson’s delay in lifting lockdown restrictions in the UK means that normal operating levels are due to come into force on 19th July. Given the easing of the lockdown rules and the changes to stamp duty rates from 1st July with the aim of returning to normal rates from 1st October, we review the latest market activity and what this means for the sector going forward. 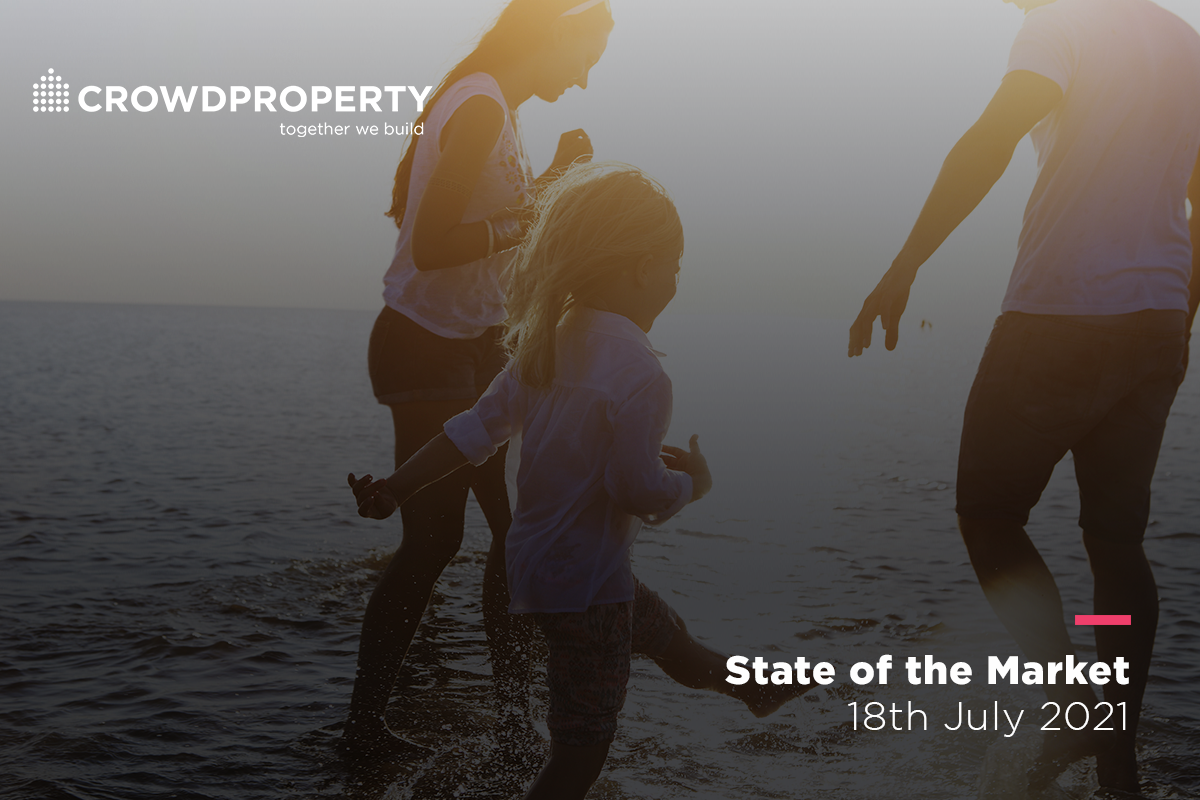 The month of July is the beginning of the end for the stamp duty holiday and consequently the market has seen a slight slowing in activity compared to previous months. Halifax has reported that for the first time since January, housing prices slipped by 0.5% last month - leading to an annual house price inflation rate of +8.8% in June. This now brings the average housing price to £260,358, which is still more than £21,000 higher compared to this period in 2020.

Buyers’ desire to look for properties with more space is not expected to fade as the economy recovers. Russell Galley, Managing Director at Halifax, commented that homemovers have the power to drive the market due to “buyers chasing the relatively small number of available properties, and continued low borrowing rates - it’s a trend which can sustain high average prices for some time to come.”

With the pandemic causing a large change to people’s lifestyles, including more time spent at home, this has spurred many to pursue a change of location. The South West is a well-established area for second homes but has been injected with an even greater spurt of activity from main residence relocators as more flexible working arrangements make the daily commute less of a consideration, according to Rightmove. This shift from urban to rural areas is supported by rising average house prices in areas such as Wales, which saw the biggest price increase in Britain at 14.6% since March 2020, where buyers can benefit from properties offering good value in a rural setting. Zoopla reports that one in five homes has increased in value by more than the average salary in the past year, with the top 10 areas including coastal locations such as Dorset (where 47% of properties recorded value increases that outstripped average salaries) and rural areas such as the Cotswolds and South Lakeland.

Although the activity is still much higher compared to previous years, Rightmove has reported that the frenetic pace has begun to slow due to high prices coupled with the lack of choice of properties. This is reflected in reports by Zoopla that soaring house price growth has pushed more than 1.8m homes in England into higher stamp duty bands – adding to affordability considerations for buyers once the tapered stamp duty holiday ends on 30 September. However, sales agreed on homes over £500,000 in May was still 49% higher than that of the same period in 2019 - even though buyers know they will miss out on the full benefit of the stamp duty saving, illustrating people’s drive to obtain a home better suited to them. Tim Bannister, Rightmove’s Director of Property Data, described this as “a new home fit for a new era. Some of that demand has now been met, and the phasing out of stamp duty reliefs and lack of choice has also taken away some of the urgency and desire to move… This super-charged activity cannot go on forever, but we expect the market to remain vigorous for at least the remainder of the year.”

Yet again, UK construction output gained further momentum throughout the month of June expanding at the fastest pace since June 1997 with the IHS Markit/CIPS UK Construction PMI® Total Activity Index registering at 66.3 in June, up from 64.2 in May. House building (indexed at 68.2) continues to be the strongest performing area with construction work increasing at the fastest pace since November 2003. Consequently, construction companies reported another sharp increase in employment numbers - attributed to the demand for both residential building and commercial projects and the upcoming lifting of restrictions. All good contributory news for the UK economy as Government support unwinds.

The recent surge in construction activity combined with struggling supply chains has seen rapid cost inflation across the construction sector, with average prices for products and materials increasing at a survey-record pace. The longer lead times for materials still remains a key issue for the construction sector. IHS Markit reported stock shortages for products such as cement, concrete, plaster, steel, timber and roof tiles with severe delays with shipping and haulage, especially for products sourced from the EU. Duncan Brock, Group Director at the Chartered Institute of Procurement and Supply, commented that “a lack of delivery drivers and logistics difficulties for EU imports left stock undelivered or unavailable.”

Tim Moore, Economics Director at IHS Markit, commented that the concerns around the availability of labour and sustainability of the surge in activity means that the level of confidence in the market has decreased to its lowest since January. Despite this, the general consensus of the sector remains largely optimistic about the growth prospects for the next 12 months. 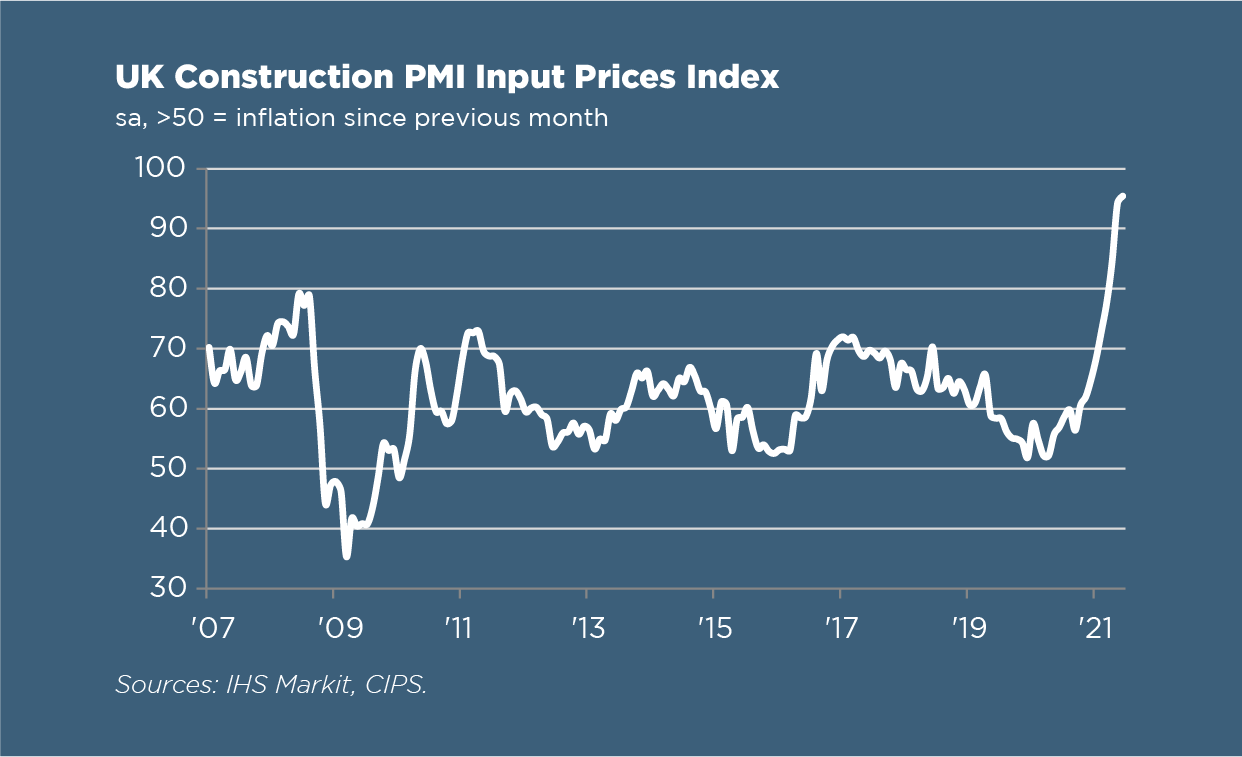 The job market continues to show signs of recovery as The Office of National Statistics has reported that the easing of lockdown restrictions has increased the total number of hours worked. The number of payroll employees showed another monthly increase of 365,000, with a total of 28.9 million in June. Consequently, for the first time since the start of the pandemic, some regions’ payroll employees are now above pre-pandemic levels.

However, Russell Galley, Managing Director at Halifax, expects that unemployment may slightly increase again “as job support measures unwind.” Similarly, EY ITEM Club recognises that the jobs market is under pressure with a significant number of redundancies announced across a number of sectors in July (particularly retail) and a survey by Make UK revealing that 46% of manufacturers expect to make redundancies over the next six months.  With companies’ ability to furlough workers due to end in October, Howard Archer, Chief Economic Advisor to EY ITEM Club, noted: “The Chancellor has clearly sought to protect as many jobs as possible once the furlough scheme ends in October as well as encourage employment with a number of initiatives in his Summer Statement. However, it is uncertain how effective these measures will be, and he may well need to come up with further measures in the Budget.”

Empowering the multitude of small and medium sized property development businesses which are key to delivering 'build, build, build', CrowdProperty is tackling the fundamental barriers behind declining housing output from this segment by building the best property project lender in the market, attracting quality developers undertaking quality projects. CrowdProperty continues to raise finance, with game-changing speed, ease and certainty, for quality projects that are ready and able to proceed with clear exit plans in liquid markets, with a quantum of units that is immaterial to proven demand levels, at mainstream price points throughout the UK.

The business has funded over £300,000,000 of property projects by SME property professionals, funding the development of more than 1,500 homes. This is still just the start of our mission to transform property finance to build more homes, increase spend in the UK economy and ever more efficiently and effectively match the supply and demand of capital for the benefit of all. Together we build a better future.

CrowdPropertyUK
@CrowdPropertyUK
Join our experts every Tue and Thu 8am on Clubhouse to learn, share, discuss and answer all things about your next… https://t.co/3G9S0wTDKy

CrowdPropertyUK
@CrowdPropertyUK
We've been nominated in the 'Best HMO Financial Services Supplier' category at the HMO Awards. Winners will be ann… https://t.co/nQrikiwsGw