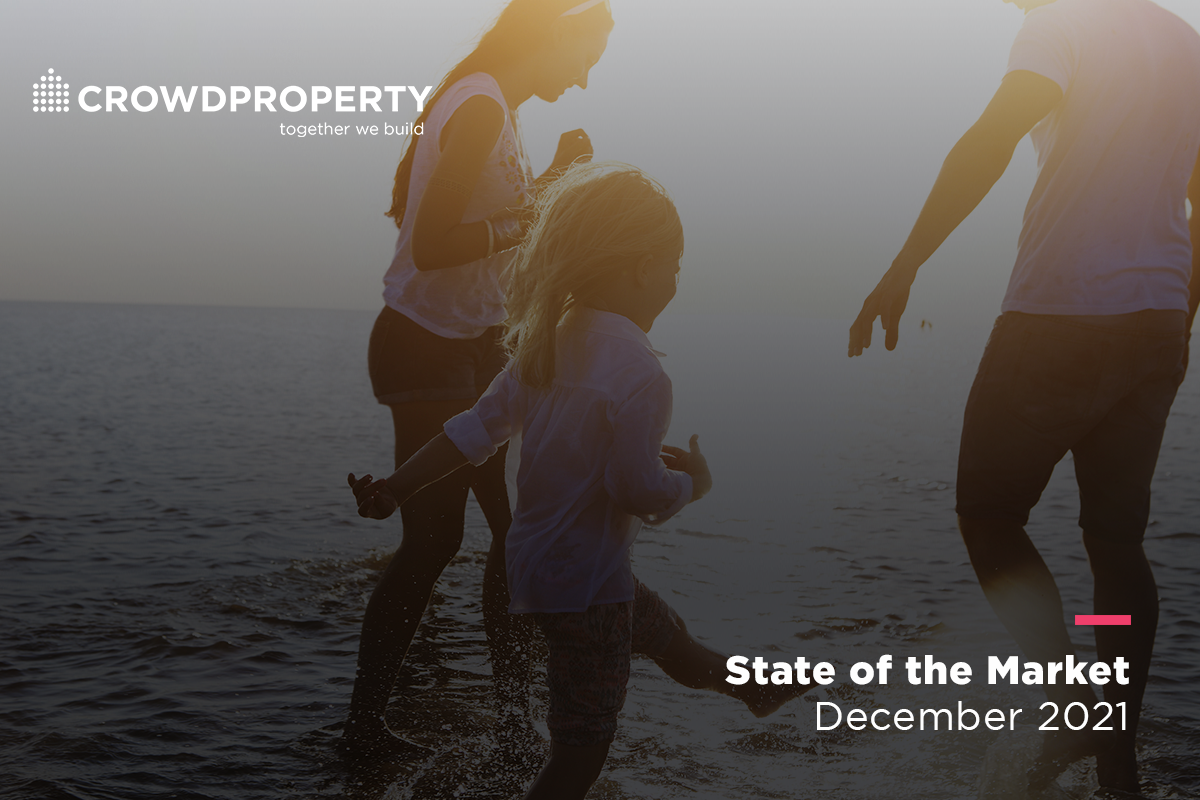 Over the course of 2021, we have seen one of the busiest periods of activity in the property market since 2007 with Zoopla reporting that 1 in 16 houses have changed hands. This frenzied activity has meant that the number of houses available for sale is down more than 50% compared to the average levels over the last five years.

This past month, Halifax has reported that housing prices have risen for a fifth straight month resulting in a 15 year high of £272,992 which is an increase of more than £20,000 since this time last year.

The 'race for space’ has been a key motivator for sellers bringing their homes to the market, influenced by people adopting a working from home or hybrid lifestyle. This also placed a premium on those properties with outdoor spaces such as balconies and gardens. With lockdown restrictions lifted (at least for now), the most recent data suggests that the ‘race for space’ is becoming less prominent than it was earlier in the pandemic. This was noted by Russell Galley, Managing Director of Halifax, who reported that flats have reached a double digit annual price inflation of +10.8% over the last year compared to slower gains for detached properties at just 6.6%. Consequently, the overall number of completed transactions has fallen back since the end of the Stamp Duty holiday.

The trends have remained consistent this month as Wales continues to be the strongest performing region in the UK, with inflation at 14.8% compared to last month’s 12.9%. Property is now more expensive than ever to buy in Wales with average prices now breaking through the £200,000 (£204,148) barrier for the first time ever in history. For England, the North West remains by far the strongest performing region (+11.4%), which is its highest rate of growth since 2005 meaning average house prices are now £209,287.

Rightmove has commented that December is traditionally quieter for the housing market which is largely down to sellers waiting for the new year to get their property on the market. Despite this, December is yet another month demonstrating out of the ordinary activity, which was noted by Tim Bannister, Rightmove’s Director of Property Data, who said that “estate agents say more people are trying to get a head-start on making 2022 their year to move by doing a lot of the prep before the New Year, including having their home ready to market during the Christmas period.”

The housing market is usually met with a boom following Christmas and so this is predicted to happen by the end of the month which may well drive house prices up yet again.

With speculation about what the Omicron variant will bring for the UK, the outlook is growing more uncertain. It is thought that the new variant could cause a dent in economic confidence, however it is too early to suggest any long-term trends that will unfold in 2022 given the resilience of the housing market throughout the pandemic. Given this, Galley noted that “we would not expect the current level of house price growth to be sustained next year given that the house price ratios are already historically high.” 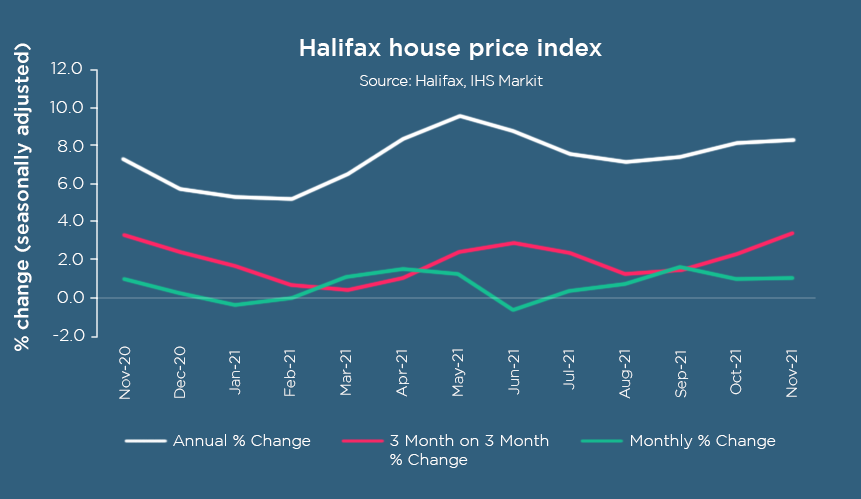 Gavriel Merkado, Property Data Expert and Founder & CEO of REalyse, stated that over the year, prices in Birmingham and Manchester have been consistently increasing compared to London which has shown more of a ‘U’ curve, taking a dip and working its way back up.

Merkado continued to say that originally the main cities that people gravitated towards were Birmingham, Manchester, Leeds and London, however more recently, with people moving out of central locations, other cities have been evolving such as Bristol and Newcastle. Similarly, data has indicated that London has been creating a ripple effect on surrounding areas like Slough and Dagenham which will see investors capitalising on these relatively high yields.

Manchester and Birmingham are undertaking a great deal of regeneration work, which, when coupled with the addition of large international corporate businesses moving out of London, means that these landscapes will continue to remain very competitive in the property market going into 2022. Although these developments present some optimism, the big question going forward will be whether this activity will progress given the constraints posed by supply chain disruption and inflation.

Property Industry Eye has predicted that strong demand and increased equity will, to some extent, keep the property market buoyant. However, with economic headwinds emerging, “we forecast that house prices will end 2022 at +3%, a slowing in growth from today’s +6.6%. We expect c. 1.2m sales next year, down from 1.5m this year, and back in line with the average transaction levels seen in recent years.”

Throughout 2021 the construction industry has been battling the issues surrounding supply of materials and skilled workers due to port delays, lack of transport and issues associated with Brexit. Therefore, this year has meant that the lacking supply has caused extremely strong input price inflation. Most recently, around 72% of the IHS Markit survey panel reported an increase in purchase prices in November.

Despite this issue, the construction industry has sustained relatively high levels of output growth in 2021 and this has continued throughout the month of November, experiencing its fastest level of output growth for 4 months. IHS Markit has cited the cause as supply chain managers having increased their purchasing activity yet again to meet the needs of the strong pipeline of building projects that has accumulated as a result of pandemic restriction being lifted and projects being allowed to resume. This robust and accelerated expansion means that the IHS Markit/CIPS UK Construction PMI® Total Activity Index rose to 55.5 in November, pointing to the strongest rate of expansion since July.

According to IHS Markit, there are signs that the worst of the supplier delays have passed. The index measuring overall supplier performance reached its highest level since April, although it still remains in negative territory. Notably though, Duncan Brock, Group Director at the Chartered Institute of Procurement and Supply, said that “just 47% of construction firms [are] reporting longer waiting times, which is the smallest number for eight months.”

Overall, business optimism has been dampened slightly at the end of November - as a result of rapid price pressures and supply shortages, firms have struggled to stay competitive. 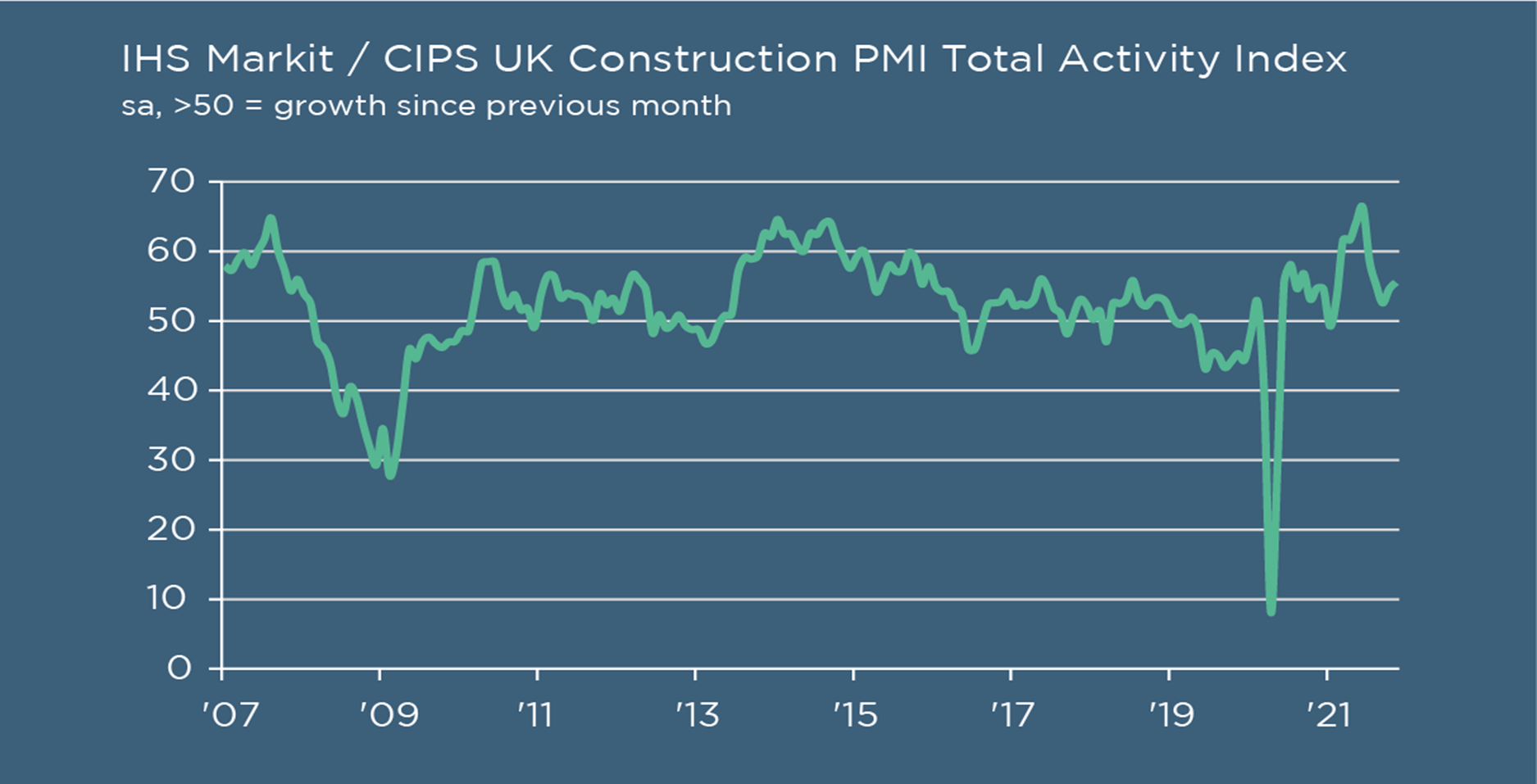 EY ITEM Club’s autumn forecast reported that GDP growth expectations have been downgraded in recent weeks, as the recovery has hit some headwinds. It is now looking like the UK economy will grow by 6.9% in 2021 and 5.6% in 2022, which is down from the original prediction of 7.6% and 6.5% back in the summer. EY ITEM Club has reported that growth in Q3 was slower than expected as it was affected by supply chain shortages, tight labour markets and rising energy prices. Furthermore, uncertainty surrounding Omicron has meant that “the path back to normality has not been a completely smooth one.” The report states that although these figures show a substantial reduction, “it would still represent two of the best years for growth that the UK economy has experienced since the Second World War.”

Going into 2022, it is predicted that the Bank of England will raise interest rates as a result of higher inflation. EY ITEM Club believes this will happen in February 2022 but could be sooner. The end of the furlough scheme was expected to cause issues in the labour market however unemployment levels have not been significantly impacted. At the start of the pandemic, unemployment figures were thought to be at 10% however now it is thought that they will peak at 4.6%. As previously mentioned, households have accumulated approximately £180bn worth of ‘excess’ savings over the year. This in combination with the strong labour market will go towards mitigating the issues of living standards and support consumer consumption. It is now thought that the UK economy is expected to get back to its pre-pandemic size by Q1 2022, in line with our European neighbours.

Overall, experts believe that the resilience of the housing market over the course of the year places confidence among experts that it will stay buoyant in 2022. EY ITEM Club predicts that activity will probably be less heated in the near term but other forces, including strong household balance sheets and demand for out-of-town properties, will support the market. Although we see house price growth decelerating over the next 12 months, we no longer expect an outright drop in values.

Furthermore, how people respond to the issues surrounding supply of materials will be a key deciding factor on the success of construction projects going into 2022.That’s where property finance by property peoples makes so much sense – at CrowdProperty we work closely and productively with the developers we back, tackling market, site and situational challenges together in partnership. Having been developers ourselves, we are laser-focused on solving the pains of small and medium sized developers, which is why working with CrowdProperty increases the likelihood of success of projects.

CrowdProperty is a leading specialist development finance lender having funded £360m worth of property projects. Apply in just 5 minutes at www.crowdproperty.com/apply and our passionate property experts will share their insights and our offer of funding for your project within 24 hours.